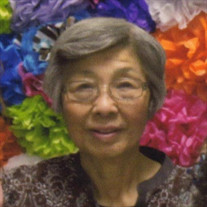 Yoshie Takahara Brown, 88, died Saturday, April 11, 2020 in Arlington, Texas. Memorial service 3:00 p.m. Sunday, June 21, 2020 at Guerrero-Dean Funeral Home, 500 E. Main Street, Grand Prairie, Texas 75050 She was born August 8, 1931 in Japan to the late Jutaro Takahara and Misao Morinaga. She married Waymond Jolly Brown in 1952 and they were married for over 56 years. They would travel the world and were stationed in many places during his service in the Air Force. Some of those places included Belgium, Omaha, Nebraska, Greenville, South Carolina and his final assignment was Carswell Air Force Base in Fort Worth, Texas. Yoshie was a very talented artist. She was an excellent seamstress and painter. She crafted works of origami and of crochet and was a fabulous cook, especially with Japanese cuisine, and she was pleased that her family and friends enjoyed her Japanese cooking. She retired from Johnson & Johnson in November of 1993 after 18 years. She enjoyed her retirement years with her family. Her grandchildren and great-grandchildren were her pride and joy. Burial will be at DFW National Cemetery and a memorial service will be scheduled at a later time. Mrs. Brown is survived by her children Gwendolyn Reynolds and her husband Reggie of Sulphur Springs, Texas, Rev. Michael Brown and his wife Lori of Portland, Oregon, daughter-in-law Carla Brown of Arlington, Texas, grandchildren Robyn Virgel and husband Donnie, Rachel Turner and husband Isaac, Robert Brown, Jr., Alisa El-Jilani and husband Saif, Makenzie Brown, Christian Brown, Chloe Brown and Amelia Brown, great-grandchildren Mason, Peyton, Alyson, Julie, Kyler, Lauryn, Isaiah, Miya and Levi. She was preceded in death by her parents, husband Waymond J. Brown, son James Brown, son Robert Brown, grandson Christopher Reynolds and her sister Chizuko Takahara.

The family of Yoshie Brown created this Life Tributes page to make it easy to share your memories.

Send flowers to the Brown family.