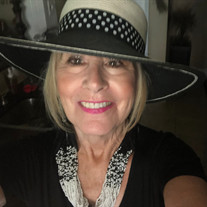 Sally Jean Parum, age 68, passed away on October 27, 2021. She was born in Wyandotte, Michigan on April 2, 1953 to Andrew J. Stackhouse, III and Jean Stackhouse (Mitchell). She was raised in New Castle, Indiana, graduating from New Castle Chrysler High School in 1971. She attended Purdue University and upon her graduation there in 1975, she moved to the booming City of Houston, Texas to find her employment. In 1977 a co-worker of Sally’s arranged a blind date for her with Michael Parum who at the time was in his first year of law school in Houston. On May 30, 1981, Sally and Michael began what turned out to be a wonderful 40-year marriage. After a honey moon in Las Vegas, Nevada, they moved to Grand Prairie, Texas where Michael practiced law and Sally worked for Bass Enterprises Production Company and later was a school teacher with the Grand Prairie I.S.D. for twenty-one years until her retirement in 2018 to spend more time with her family and friends. Sally enjoyed RV camping, visiting with and traveling with family and friends especially to the mountains and to northern Michigan to visit her brother and sister and their families. Sally will always be known for her love of and loyalty to her family and friends. Sally loved people and greeted everyone as a friend. She was a member of CrossPoint Church of Christ. She was preceded in death by her parents, Andrew and Jean Stackhouse and Lois Stackhouse (Ibbotson). She was also preceded in death by her beautiful sons, Brett Andrews Parum (7) and Trent Michael Parum (16). She is survived by her husband, Michael Parum; her son, Matthew Parum; her brother, Andrew Jackson Stackhouse, IV (wife Sue); her sister, Lisa Winters (husband Neil); and numerous nieces and nephews and great nieces and nephews. Her Celebration of Life is being held on Saturday, December 18, 2021 at 1:00 p.m. at CrossPoint Church of Christ, 3020 W Bardin Rd, Grand Prairie, TX 75052. In lieu of flowers, memorials may be made in Sally’s name to the charity or organization of your choice.

The family of Sally Jean Parum created this Life Tributes page to make it easy to share your memories.

Send flowers to the Parum family.