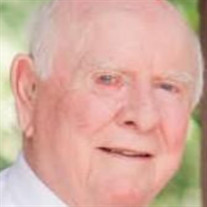 Robert Harold Chambers, known to all as "Judge", 93, loving father, grandfather and faithful friend, passed away on Tuesday, July 20, 2021 at a local rehabilitation center in Irving, TX. Visitation: 10:30 to 11:30 a.m. Thursday, July 29, 2021 at Calvary Baptist Church, 401 W. Church Street, Grand Prairie, TX, 75050 followed immediately by Funeral Services at 11:30. Burial: 2 p.m. at St. Paul Cemetery in Midlothian. Judge Chambers was born on June 27, 1928 in Ellis County, Texas, the 3rd of 5 children born to the late Earl James Chambers and the late Erma Lonell Goodwin Chambers. He would live briefly in the city before moving back to outdoors and country that he loved. He would farm many years, raising cattle and crops. His hope was that his family would come to love the outdoors and agriculture life, just as he had done. Always a man of faith, he was a member of Calvary Baptist Church for almost seventy years. Even after moving to Mansfield, he was sure that his association with the church remained strong. He is survived by his wife of seventy-two years, Edna Merle Russell Chambers; sons, Larry Chambers and his wife Kay, Randy Chambers and his wife Melinda; grandchildren, Joshua Chambers and his wife Stacey, Matt Chambers, Jacob Chambers and his wife Karen, Kelle Sherman and her husband Bruce, Kayla Wehrli and her husband Timo; great-grandchildren, Maddyson, Jack, Luke, Grant, Marlowe, Wyatt, Marshall, Blake, Elena and Myra.

The family of Robert "Judge" Harold Chambers created this Life Tributes page to make it easy to share your memories.

Robert Harold Chambers, known to all as &quot;Judge&quot;, 93, loving father,...

Send flowers to the Chambers family.