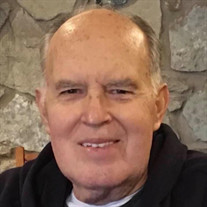 Michael Duane Faulkner passed from his earthly home to his eternal home on August 29TH, 2020 after an extended bout with several ailments. Visitation: 6 to 8 pm Tuesday, September 1, 2020 at The Heartland Church, 4020 Nazarene Drive, Carrollton, TX, 76010 where funeral services will be conducted at 9:30 am Wednesday. Burial will follow at Laurel Land Memorial Park, Dallas. Mike was born Nov.12, 1941 in Dallas, TX to Guy & Helen Faulkner. Mike was raised by his mother (affectionately called Meme by her grandkids) who worked two jobs to take care of her family. Mike was an outstanding athlete and graduated from Adamson High School in 1959. After graduation, he became a master skilled union electrician where he excelled in his work for over 45 years until his retirement. Along with this, he married his high school sweetheart, Jan Fulfer, and went on to have 5 children. After several years, he moved to Indiana where, along with his wife Jan were instrumental in pastoring a church, Christ Gospel Church, which still is in existence today. Mike (Dad, Popo to the grandkids) is survived by his wife of over 61 years, Jan, sons Stephen (Sherri), Brad (Deb), Kenneth (Kathy), Randall (Julie), and Michael Duane Jr. (Marty), grandchildren Ashley (Nick), Natalie, Cory (Kelsea), Jeremy, Chris, Bradley, Michael, Merrik (Mikayla), Keegan (Olivia), Erica (Mathew), Amber (Randy), Sarah (Luis), Taylor, Reed, Ramsi (Adrian), Mikey (Karli) and Makenzie, along with 20 great grandchildren, sister, Sharon (Mike) Hinkle, niece Shelly Carden and nephew Mark Carden. He was preceded in death by another sister, Sandra. Mike was a kind, hard-working man, husband, father, grandfather and great-grandfather that never met a stranger. He had a love for God and was a great example of how life should be lived. He dearly loved his family and enjoyed sports, reading and extended studies, and spending time with loved ones and in the church. He will be sorely missed but remembered with great respect and love. Funeral arrangements are as follows: Visitation and viewing will be on Tuesday at Heartland Church on Tuesday Sept. 1st from 6pm to 8pm and the funeral will be on Wednesday Sept. 2nd at 9:30am in the same location.

The family of Michael Duane Faulkner created this Life Tributes page to make it easy to share your memories.

Michael Duane Faulkner passed from his earthly home to his eternal...

Send flowers to the Faulkner family.