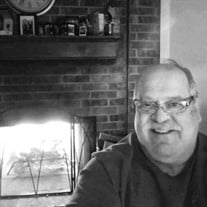 Lawrence “Larry” Philip Pacos of Arlington, Texas was called to be with Our Lord on Monday, March 15, 2021 at the age of 65. Larry was born July 3, 1955 in Dunkirk, New York to Stanley and Patricia (Walawender) Pacos. After graduating from Dunkirk High School, he enlisted in the U.S. Army where he was an expert rifleman and sharpshooter. He was honorably discharged at Fort Hood and would remain a proud Texan for the rest of his life. Larry was a professional truck driver and even upon his recent retirement, continued his passion for travel on the road. One of his goals was to visit all the major league ballparks throughout the country. He also loved to spend time in the many small towns in Texas and enjoy their uniqueness and character. He was an avid Texas Rangers and Texas Christian University (TCU) fan, proudly wearing their colors as part of his daily attire. A devoted Catholic, he was an active member of St. Vincent de Paul Catholic Church in Arlington. His love for his children and grandchildren was first and foremost in his life and he will be missed dearly. Larry is survived by his children Larry and his wife Melanie, Cheryl, Kimberly, and Zachary Pacos; grandchildren Hailey and Allison Swafford, and Tatum Pacos; mother Patricia Pacos; sisters Joan Jordan and her husband Jim, and Victoria Snow. He was preceded in death by his father, Stanley Benedict Pacos. Visitation will be from 2:00-3:00 p.m. on Sunday, March 28, 2021 at Guerrero-Dean Funeral Home, with a Rosary to begin at 3:00 p.m. Funeral Mass will be at 11:00 a.m. Monday, March 29, 2021 at St. Vincent de Paul Catholic Church, followed by interment at 1:00 p.m. at Dallas-Fort Worth National Cemetery. In lieu of flowers, donations in Larry’s memory may be made to Wreaths Across America: www.wreathsacrossamerica.org/pages/167330.

The family of Lawrence "Larry" Philip Pacos created this Life Tributes page to make it easy to share your memories.

Send flowers to the Pacos family.