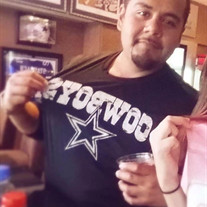 Jose Luis Rodriguez, 38, passed from this life on July 6th, 2021 in Dallas TX. He was born on November 3rd, 1982 in Houston, TX to Ana Medina Rodriguez. Visitation: 5- 8 P.M. Friday July, 9, 2021 at Guerrero-Dean funeral home, 500 E Main Street, Grand Prairie, TX 75050 Jose was a man who took pride in his family, he loved spending time with them, especially his kids who were his pride and joy and who he loved very much. He would've done anything for his family. He is going to be missed so much by everyone who knew him. He was always cracking jokes and making everyone laugh. There's nothing he wouldn't do for any of his family. He was also the biggest Dallas Cowboys fan, Win or lose. If there was a game on he was watching it and grilling out, another one of his talents that he enjoyed. It won't be the same watching a Cowboys game without him. Jose spent most his adult life working as a forklift operator which he enjoyed and was good at. He will be remembered as strong, loving, funny, hardworking and honest. He is known as the strongest person in the family. He enjoyed time with his family cruising around while listening to music, going to main event, trying out new restaurants, and having. movie nights. Jose was a strong man who never gave up, he always kept it pushing til the very end. He was strong minded and always made sure those around him were good even if he wasn't himself. He will be deeply missed by family and friends. He leaves to cherish his memory forever his mother Ana Medina Rodriguez and step father Roberto Torres; His children Alissa Rodriguez, and Jose Jovani Rodriguez; Grand-daughter Ayla Lyles; Brothers Andy Rodriguez, David Torres, Erick Torres, Emmanuel Torres and Sister Elizabeth Torres.

The family of Jose Luis Rodriguez created this Life Tributes page to make it easy to share your memories.

Send flowers to the Rodriguez family.