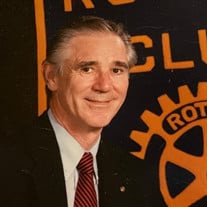 John Robert Wright, Jr. (92) passed away peacefully on Sunday December 20, 2020 which was his 92nd birthday. He was known to all that loved him as a prolific storyteller, a pursuer of justice, a lover of music and the arts, and a tinkerer. Mr. Wright was born on December 20, 1928. He was raised in Dallas and graduated from Crozier Tech High School in 1947. He attended North Texas State College, graduating in 1951. Upon graduation he played one summer in minor league baseball before returning to Texas and starting law school at the University of Texas Law School in Austin. When he graduated from law school, he was admitted to the bar in 1954 and began practicing in Grand Prairie. In 1956 he married Topsy Roberson of Nocona, Texas who he had met in college. In 1958 they welcomed daughter, Martha Claire Wright and in 1962 son, John Robert Wright, III, to this union. During his life, Mr. wright was an avid sportsman. He played and coached baseball and soft ball into his seventies. He coached the Dallas Baptist College Baseball team for two summers in the 1970s and, coached First Baptist Church of Grand Prairie’s Slow Pitch Softball team for many years. Baseball was not the only sport he was interested in, however. He was an avid golfer. He became one of the first Golf Marshals at Tangle Ridge Golf course, and passed his love of golf to his son, John Robert Wright, III and grandson, Jacob Post. In addition to participating in sports, he enjoyed attending sporting events. Over, the course of his life, he held season tickets to the Dallas Cowboys, Texas Rangers and Dallas Mavericks, all of which he enjoyed attending and cheering on the home team. While practicing law in Grand Prairie, Mr. Wright became interested in politics. In 1964 he was elected to the Texas House of Representatives. He served three terms. During his time in the Legislature, he passed several bills, including one of significant importance to him- a bill on Language Disorders in Children which focused on Dyslexia testing and education, a learning disorder from which his nephew, Drue Council suffered. For his service in this capacity, Mr. Wright was named as Public Servant of the Year in 1965 by the Grand Prairie Chamber of Commerce. During his legal career, Mr. Wright also represented multiple School Districts in the North Texas area. At the request of Mrs. Ruthe Jackson, he started the first school foundation in Texas in 1970 for the Grand Prairie independent School District. This foundation still proudly supports students and staff of the Grand Prairie independent School District. Mr. Wright continued his practice in Grand Prairie for almost 60 years- until 2013, when he retired at the age of 85. During, the course of his practice, he appeared before the Supreme Court of the United States in the 1970s. In his later practice he began representing people in Federal Criminal cases in which he was quite successful. All along fighting for the underdog. For his years of service to his community, in 2000 the Grand Prairie Chamber of Commerce named him as Citizen of the Year. He was also a 33rd Degree Master Mason. In his seventies, Mr. Wright joined the Orchestra at First Baptist Church Grand Prairie and played the trumpet there for many years. Later, he would play special music for the congregation at West Fork Presbyterian Church, where he met the Reverend Doctor Eleanor Cherryhomes. After losing his wife in 1998, Mr. Wright married Dr. Eleanor Cherryhomes in 2015. They lived at Robson Ranch in Denton, Texas where Mr. Wright revived his love of card games, particularly Bridge. He was a faithful member of the Lone Star Bridge Club. He also loved making new friends and having a new audience for his stories. John Wright was preceded in death by his father, John Robert Wright, Sr., his mother Anne Taylor Wright, his wife Topsy Roberson Wright, his brother Merton Thomas Wright and his nephew, Drue Council. He is survived by his wife, Dr. Eleanor Cherryholmes, his sister Nell Council, his daughter Martha Claire Wright and her children, Taylor Post, Jacob Post and Kathleen Post; his son John Robert Wright, III, his wife Janet Smith and their daughters, Lauren Greil, husband John Greil; Hilary Donadio, husband Dan Donadio; and Chloe Wright, partner Loch Roberts; and great granddaughter Lucy Greil. He is also survived by nieces Kristi Collins and her children Ivan Collins and Barrett Collins; and Melissa Benge, husband Jeff Benge and their daughter, Jessica Pena, husband Alec Pena and a host of other family, friends and colleagues that loved him dearly. The family requests that in lieu of flowers, donations may be given to: University Baptist Church, Waco, TX​​​ www.ubcwaco.org​​ Scottish Rite Hospital for Children, Dallas, TX​​ www.scottishriteforchildren.org YMCA of Grand Prairie​​​​​ www.donatetothey.org​​ University of North Texas School of Music, Denton, TX​ www.music.unt.edu​​ Arrangements entrusted to Guerrero-Dean Funeral Home under the direction of Aaron King, Funeral Director.

John Robert Wright, Jr. (92) passed away peacefully on Sunday December 20, 2020 which was his 92nd birthday. He was known to all that loved him as a prolific storyteller, a pursuer of justice, a lover of music and the arts, and a tinkerer. Mr.... View Obituary & Service Information

The family of John Robert Wright Jr. created this Life Tributes page to make it easy to share your memories.

Send flowers to the Wright family.