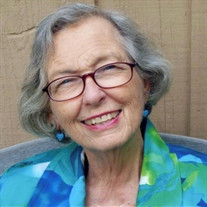 Jane Gillespie Cross went to her eternal home on April 12, 2022, surrounded by her family. Since the passing of her husband, Noble Clois Cross, on April 16, 2020, her mind and body were never the same. A part of her went with him as they spent... View Obituary & Service Information

The family of Jane Gillespie Cross created this Life Tributes page to make it easy to share your memories.

Send flowers to the Cross family.