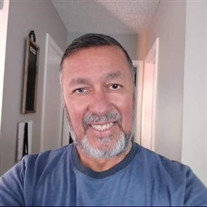 Eloy Garcia, age 61, lost his life to a very hard battle with Covid-19 on February 17, 2022. Eloy was born August 3, 1960 in Harlingen, Texas to Benita Garcia and Margarito Garcia. He was the fourth eldest of seven siblings raised on Hickory Street in Grand Prairie, Texas. He spent his childhood getting into mischief with his brothers and sister. As a young adult he began his family by a marriage with Margarita Mauricio through which he had his first born, Melissa Garcia Montalvo. He then had his second daughter, Elloytha Garcia a.k.a. junior, with Sharla Royal. Lastly, he was gifted Gina Orozco and Ana Orozco by Lenora Ingram. Besides devoting his life to his four daughters, Eloy dedicated himself to his work at Maaco Auto Body Shop. He spent over 25 years climbing the ladder from body work to supervisor. When he wasn’t hard at work he could be found watching a Cowboy’s game, cooking out, or spending time with his family which he cherished. He had 8 grandchildren with whom he spent nearly all of his free time. Eloy was loved and respected by everyone around him. He was known for his sense of humor, welcoming nature, and was recognized as the definition of love itself. He will forever be remembered as an amazing Dad, Grandpa, Brother, Uncle, and Friend. Visitation will be Saturday, February 26, 2022 at Guerrero-Dean Funeral Home, 500 E. Main Street, Grand Prairie, Texas from 10:00 a.m. until 1:00 p.m. with a Prayer Service at 11:00 a.m. Eloy is survived by his daughters, Melissa Garcia Montalvo and her spouse Ricardo, Elloytha Garcia, Ana Orozco and Gina Orozco, grandchildren, Brianna Nicole Montalvo, Gigi Nicole Montalvo, Aaron Montalvo, Kaliyah Garcia, Kira Garcia, Dominic Regalado, Kori Brewer and Kaiden Miles, siblings, Victor Morales, Hector Garcia, Juan Garcia and Diana Garcia. He was preceded in death by his parents, brothers Luis and Tony Garcia.

Eloy Garcia, age 61, lost his life to a very hard battle with Covid-19 on February 17, 2022. Eloy was born August 3, 1960 in Harlingen, Texas to Benita Garcia and Margarito Garcia. He was the fourth eldest of seven siblings raised on Hickory... View Obituary & Service Information

The family of Eloy Garcia created this Life Tributes page to make it easy to share your memories.

Eloy Garcia, age 61, lost his life to a very hard battle with...

Send flowers to the Garcia family.