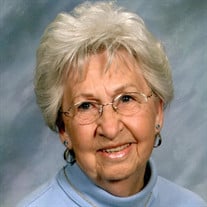 Dovie Joyce Carter, 87, died on Tuesday June 23, 2020 at Town Hall Estates, Arlington, Texas. Memorial Service: 11 a.m. Saturday July 11, 2020 at Guerrero-Dean Funeral Home in Grand Prairie, Texas. There will not be a funeral service since she wanted to donate her body to University of Texas Southwestern Medical Center (UTSW) to the Willed Body Program to contribute to advance medical science and education. Dovie was born October 19, 1932 in West Mountain (near Gilmer), TX to James Henry Nix and Bula Estelle Miller. On April 12, 1952, at the ripe age of 19, she married the love of her life, Charles Daniel Carter, Sr. in Longview, TX. She was preceded in death by her husband, her 7 siblings, and her great-granddaughter (Angelica Reign Pipkin). Surviving her is her oldest daughter, Vicki Carter Stanford of Arlington, TX, two sons, Charles (Deborah) Daniel Carter, Jr. of Grand Prairie, TX, and Brant Carter Kabella of New Mexico; seven grandchildren (Jason, Philip, Katherine, Rachael, Brandi, Ryan, and Robyn); five great-grandchildren (Whitney, Dominic, Jaylen, Jordyn, and Brayden); and two great-great-grandchildren. Dovie worked with Southwestern Bell for a short time before working with the Grand Prairie school district office for at least 20 years before her so called retirement. She attended St. John’s Lutheran Church where she was an avid member/volunteer for 20 plus years. She was actively involved in giving back to her church and the surrounding community by participating in walks and events to raise money for others. She loved spending her time going to church, bowling on several leagues, spending time with family, visiting her brother Leon before he passed away in East Texas, traveling, and dogs, especially miniature Schnauzer’s. She lived in Grand Prairie from 1962 until 2015.

The family of Dovie Joyce Carter created this Life Tributes page to make it easy to share your memories.

Send flowers to the Carter family.