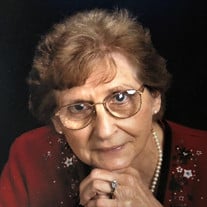 Dorothy Ann Howard Reynolds, Godly mother, loving grandmother and prayer warrior, entered into arms of her Lord on Sunday evening, September 6, 2020 at a local hospice center. Visitation is Tuesday, September 15, 2020 from 10:30-11:30am with a service at 11:30am at The Haven Church of the Nazarene in Grand Prairie, Texas. Burial: DFW National Cemetery. Dorothy Ann Reynolds was born on September 25, 1928, the youngest of 4 children born to the late Grover Cleveland Howard and the late Fannie Langford Howard in Bonita, Texas. She would meet and marry the late Clyde A. Reynolds in St. Jo, Texas on October 13, 1946. They would move to the Grand Prairie area when Clyde started working for LTV. They would make it there permanent home where they would raise their 5 children. Dorothy was a skilled pianist, playing at the Church of the Nazarene in Grand Prairie for many years. At the age of ninety-one, she was still able to play her favorite hymns. She thoroughly enjoyed attending gospel concerts and listening to the Gather's on the television. She was a Godly and Christian woman, even during the times no one was watching. Survivors include her children, Linda Ann Reynolds Kevil and her spouse Barry, Donna Sue Reynolds Martin and her spouse Thomas, Reginald Clyde Reynolds and his spouse Gwendolyn, Roger Alan Reynolds, Phillip Addison Reynolds and his spouse Tracy; 9 grandchildren; 16 great-grandchildren and 8 great-great grandchildren. In addition to her husband and parents, she was preceded in death by a brother, Otis Howard and sister, Ovie Vaughn and Bonnie Russell.

The family of Dorothy Ann Reynolds created this Life Tributes page to make it easy to share your memories.

Send flowers to the Reynolds family.