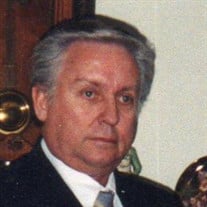 Danley Worth Vaughn Jr., 80, former long-time resident of Grand Prairie and current resident of Robert Lee, TX, passed away on Saturday, March 13, 2021 following a brief illness. Graveside Service with military honors: 1 pm Tuesday, March 23, 2021 at DFW National Cemetery. Danley Worth Vaughn Jr. was born on February 4, 1941, the son of the late Danley Vaughn Sr. and the late Robbie Joe Haggerty Vaughn in Dallas, Texas. He retired after many years of driving trucks on long-hauls, traveling all across the country. After the death of his wife, the late P.J. Vaughn, he decided he would move to Robert Lee, Texas to pursue his passion and interest in horses. His last years were filled with happiness and containment, although not ending his "stubborn streak". He enjoyed the time of country living. He is survived by his children: Rene Vaughn, Michael Lawrence Vaughn and his spouse Phyllis, Destiny Vaughn and Gabriel Vaughn, Dee Ann Romine and her spouse Mike; grandchildren, Noeanna Martinez, Kyle Copeland and a brother, Michael Blain Vaughn. In addition to his wife, he was preceded in death by a grandson, Jose Vela Jr.

The family of Danley Vaughn Jr created this Life Tributes page to make it easy to share your memories.

Send flowers to the Vaughn family.