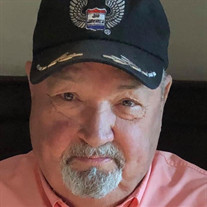 Charles Randall Hamill, 76, faithful servant, first to Christ, second to family and church, faithful husband, loving father, grandfather and great-grandfather, was called home on Friday afternoon, September 10, 2021 while in a Plano, Texas hospital. Due to Covid concerns, the family kindly request all friends wear a mask, refrain from hugging or touching. Your consideration is appreciated. Visitation: 10 to 11 a.m. Wednesday, September 15, 2021 at The Heartland Church, 2020 Nazarene Road, Carrollton Texas followed immediately by a Life Celebration at 11. Burial will follow at Bear Creek Cemetery in Euless, Texas. Charles Randall Hamill, known as Charlie or CR to friends, was born on January 20, 1945 in Bennington, Oklahoma, the son of the late Charlie Raymond Hamill and the late Mary Lou Jackson Hamill. He was the eldest of 3 children and only son. While hanging out with high school friends in Dallas, he would meet Diane Sue Pellam. They would marry on March 22, 1963. He would remain a faithful husband and her best friend for the next fifty-eight years. CR was a master carpenter and builder. Many of the structures in the local area contain his fingerprint. In spare time, you might find him camping, hunting, fishing or watching western movies. He was always quick witted, and his laugh could be heard by anyone nearby. Godly, dependable and protector are some of the words used to describe him. He emulated Christ in every area of his life, exhibited by his mission trips all over the world. He was a trusted confidant for his home church, The Heartland Church of Carrollton, (formerly Christ Temple) where he served as a Trustee for many years and 3 different pastors. Charles made his decision to serve Christ after his marriage to Diane. Because of his commitment, he leaves behind a lengthy legacy of family and many people impacted by his life. Survivors; wife and best friend of fifty-eight years, Diane Pellam Hamill; daughters, Shellie Hamill VanDruten and husband Ken VanDruten, Dena Hamill Green, Debbie Hamill Bernard and husband Robert Bernard; grandchildren, Lauren Green, Ryan Green, Saleen Green, Kylee Messick, Austin Messick, Austin Bernard, Alli Bernard, Aaron Castro; great-grandchildren, Maxwell Green and Alyssa Green; sister, Sharon Hamill Lowrance. In addition to his parents, he was preceded in death by a sister, Brenda Hamill Moore.

The family of Charles Randall Hamill created this Life Tributes page to make it easy to share your memories.

Send flowers to the Hamill family.