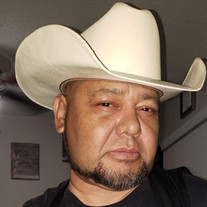 Cesar Alardin Limon Jr., 55, a native of Pharr, Texas and long-time resident of Abilene passed away on Tuesday, May 11, 2021 at a Dallas hospital. Visitation: 5 to 8 p.m. Friday, May 14, 2021 at Guerrero-Dean Funeral Home, 500 E Main Street, Grand Prairie, TX, 75050. A private committal will occur at a later date. Cesar Alardin Limon Jr. was born on February 28, 1966, the oldest of 6 children. The family would move to Abilene, Texas where he attended schools, graduating from Abilene Cooper High School in 1982. Cesar then went on to serve in the Army and worked many years after as a painter. Cesar was passionate about fishing, especially if he could do so with family members and enjoyed playing in 8 and 9 ball pool tournaments. His children and grandchildren were the light of his life and to them their hero. His kind and loving heart will be missed by all. Those who will miss him most dearly include a loving wife of thirteen years, Nelly Ernestina Sosa; daughters, Mercedes Alardin, Linda Alardin and spouse Byron Jones, Virginia Raines; grandchildren, Ace'nn Lee, Kyson Lee, Kaydrea Jones, Alexis Raines and Autum Shelton; adoring mother and matriarch of the family, Linda Rios; all his younger siblings, Lupe Filorio and spouse Jesus, Chito Alardin and spouse Lisa, Silbia Gaytan and spouse Thomas, Tony Alardin and companion Matt Otis, Jessie Alardin and spouse Norma; numerous aunts, uncles, cousins, nieces, nephews and many friends.

The family of Cesar Alardin Limon created this Life Tributes page to make it easy to share your memories.

Send flowers to the Limon family.