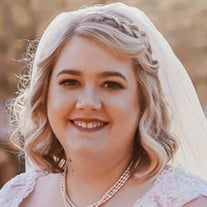 Cadee Beth Stifle Westbrook, 24, completed her earthly journey on March 11, 2020. She passed away unexpectedly at her home in Mansfield. Visitation: 7 to 9 p.m. Monday, March 16, 2020 at Cross Point Church, 3020 Bardin Road, Grand Prairie, Texas, 75052, where funeral services will be conducted at 1 p.m. Tuesday. Burial will follow at Midlothian Cemetery. Cadee was born on November 29, 1995 in Dallas, Texas, the daughter of Kirk Edward Stifle and Shelli Denise Hurst Stifle. She was raised in Midlothian where she graduated from High School. She chose to attend The University of Texas in Arlington where she majored in education. She would begin her career in teaching in Grand Prairie where she taught 9th grade math at South Grand Prairie High School. She would marry Matthew Westbrook and was enjoying being a newlywed. They would find a home in Mansfield, and were relishing the opportunity to be new parents. She enjoyed trying her hand at baking, and had become confident in her ability to make delicious cookies. Survivors: husband, Matthew Westbrook; son, Taylor James Westbrook; parents, Kirk and Shelli Stifle; brother, Brian James Stifle and his spouse Jordan; sister, Amy Stifle Blalock; maternal grandparents, Sharon Hurst, James Michael Hurst; paternal grandparents, Kay Stifle and Pete Stifle. She also leaves many aunts, uncles, cousins, and a host of friends.

The family of Cadee Beth Westbrook created this Life Tributes page to make it easy to share your memories.

Send flowers to the Westbrook family.