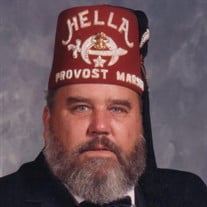 Bobby Clyde McWhorter, 80, loving husband, father and grandfather, passed away on Saturday, March 7, 2020 at a hospice care center in Fort Worth. Visitation: 6 to 8 p.m. Friday. Funeral: 12 p.m. Saturday, March 14, 2020 at Guerrero-Dean Funeral Home, 500 E Main Street, Grand Prairie, Texas, 75050. Burial: Mt. Creek Cemetery. Bobby McWhorter was born on February 14, 1940 in Collinsville, Grayson County Texas, the oldest of 2 children and the son of the late Robert Arthur McWhorter Jr and the late Royce Mozelle Sanders McWhorter. He grew up in Grand Prairie, and married Marilyn Joan Wynn. Bobby was employed at LTV where he worked as lead man for tear down of the F-8 fighter jets. He was a long-haul owner-operator truck driver for Coors LTD and owned McWhorter Wielding & Racing Team. He also was co-owner of Goober's Car Care. In 2005, he would move to Alvarado to take care of his ailing mother and family acreage. Bobby spent most of his time as a cattleman, working on his ranch where he raised cows, chickens and horses. He had a great love for animals, farming, fishing, hunting and traveling to the coast. He was totally at peace living the country life. Racing was a passion with Bobby as he built many race cars for his team. He spent every weekend at the racetrack or keeping up with his favorite Nascar Racer, Dale Earnhardt. Motorcycle toy runs and togetherness of his friends that motorcycles brought gave him great happiness. He was a veteran of the US Navy and worked his way through the Masonry, to Scottish Right and on to becoming a Shriner, one of the highest levels in the Masonic Order. He is survived by his wife of sixty years, Marilyn Joan Wynn McWhorter; children, Melody Werry and her spouse Mark, Robbie Farnham and her spouse Kevin, Jason McWhorter and his spouse Gayla; grandchildren, Jonathan Werry, Jordan Werry, Ethan McWhorter, Colby McWhorter, Katie Kirkwood and her spouse Patrick; great-grandchildren, Dylan, Madisson and Khloe Norris, Jaylon and Korbin Kirkwood. In addition to his parents, he was preceded in death by a grandson, Andrew Norris and a sister, Patricia (Patsy) McWhorter.

The family of Bobby Clyde McWhorter created this Life Tributes page to make it easy to share your memories.

Send flowers to the McWhorter family.