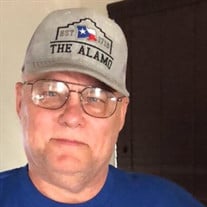 William "Bill" Earl Hughes, 66, loving husband, father, grandfather and friend, passed away on Tuesday, September 22, 2020 following an extended illness. Visitation: 1 to 5 p.m. Saturday, September 26, 2020 at Guerrero-Dean Funeral Home, 500 E Main Street, Grand Prairie, TX, 75050. A private committal will be conducted at a later date. William Hughes was born on April 21, 1954, the oldest of 3 children of William Edward Hughes and Vera Mae Siebert Hughes. The son of a Marine, the family would live in various places during his early years. He would graduate from Sam Houston High School in Arlington. At a young age, he began working for Glitsch Industries, now Koch Glitsch. He would remain there for the next thirty-seven years, working until the time of his retirement. In 1991, he would meet Dora Gaona at work. They would be inseparable for the next twenty-nine years. They loved traveling, camping and attending classic car shows together. Very little made him happier than spending time in the travel trailer at various locations all across the country. Survivors: wife, Dora Denise Gaona; children, William Earl Hughes Jr., Shelly Nicole Hughes, Shan Naomi Hughes, Ben Castillo and his spouse Sarah, Tina Coppinger and her spouse Scott, Randy Gaona and his spouse Ashley; 13 grandchildren; 4 great-grandchildren and his 6 fur children, Chloe, Titan, Zeus, Achilles, Daisy and Belle. In addition to his parents, he was preceded in death by a brother, Raymond Dean Hughes and a sister, Vivian Hughes.

The family of William Earl Hughes created this Life Tributes page to make it easy to share your memories.

Send flowers to the Hughes family.