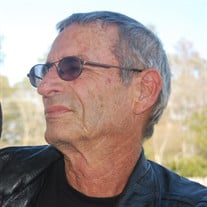 Wayne Calmes was born January 11, 1947 and died peacefully at his home, sometime near February 4, 2022. Wayne was the oldest of 3 children born to the late Jesse Lee Calmes and the late Edwinna Jernigan Calmes. Visitation: 11:30 to 12:30, Tuesday, March 1, 2022 at First Baptist Church of Grand Prairie, TX, followed immediately by funeral services at 12:30. Burial: DFW National Cemetery. Born and raised in Dallas and a graduate of South Oak Cliff High School, Wayne went to Sam Houston State University for one semester. After briefly enjoying the college life, he came home and volunteered to join the US Army, spending tours in Germany and Pleiku, Vietnam. After returning home in August 1969, he soon met and married Becky Foy. Together, during and after their marriage, they raised 4 amazing children, all successful in their own endeavors. Just this past December, Wayne had the honor of seeing his oldest son, Robert, graduate with an MBA from the University of the Incarnate Word. Wayne preferred to live alone on Lake Palestine. He loved to fish and was an avid firearms enthusiast. He was passionate about working and remained fully employed driving a tanker truck until last year. He loved Mexican food, especially chicken fajitas with garlic butter sauce. Anyone who knew Wayne knew he loved to discuss politics or religion with anyone who would listen. He had a very close relationship with God and knew his Bible. He was also interested in the book of Revelation and talked about his belief Jesus would return while he was still alive. He had a very tender side and noticed when someone was upset. Just getting a hug or hearing his voice was comforting and will be greatly missed. He was always prepared to tell you a corny joke to make you laugh! He is survived by his children; Carol Anderson, Robert Calmes, Paula Calmes and Joseph Calmes; grandchildren, Aaron Lynn Treadwell, Casey Leigh Christophers, Julianna Kay Foster, Michael Lucian Foster, Johnathan Tyler Calmes; sister, Lisa Calmes Peniston and a brother Keith Edwin Calmes. Also many nieces and nephews. In addition to his parents, he was preceded in death by both sets of grandparents, and aunts, uncles and cousins. Rest well Wayne untill we see you again! We miss you and love you and know you are now healed in the presence of God!

Wayne Calmes was born January 11, 1947 and died peacefully at his home, sometime near February 4, 2022. Wayne was the oldest of 3 children born to the late Jesse Lee Calmes and the late Edwinna Jernigan Calmes. Visitation: 11:30 to 12:30,... View Obituary & Service Information

The family of Wayne Lee Calmes created this Life Tributes page to make it easy to share your memories.

Send flowers to the Calmes family.