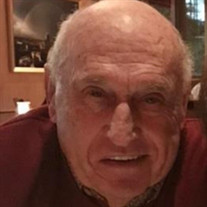 Walter "Walt" H. Wileman, 86, faithful follower of Christ, loving husband, caring father, grandfather, brother and friend, entered into eternal life on Thursday afternoon, April 9, 2020 following a lengthy illness, at his home in Southlake, Texas. A private family service will occur on Friday, April 17, 2020 at The Heartland Church in Carrollton, Texas where he was a thirty-five year member. The service will be live-streamed for friends at 1 p.m. Entombment will follow at Bluebonnet Hills Memorial Park in Colleyville, Texas. In lieu of flowers, the family requests donations be made in Walt's name to Encompass Hospice of DFW, 901 W Rosedale St., Suite 250, Fort Worth, TX, 76104. Walter Wileman was born October 23, 1933, the second of five children born to the late Edward Wileman and the late Ellen Rankin Wileman in South Bend, Indiana. He would attend school in South Bend, graduating from Clay High School. Being the son of employees of the University, he often joked that he "went through" Notre Dame. When pressed for a time, he would jokingly reply, "When I visited the campus". Shortly after high school, he would marry Mary Ruth Hazelip on June 27, 1953. For the next sixty-six years, she would be his constant companion, help-mate and supporter. His work with The Associate Corporation of North America would require their constant transfer and moving. The experience allowed them to live in various cities, most recently Chicago, before settling in the Dallas-Fort Worth area. He retired at the age of fifty-nine as Executive Vice President after thirty years of service. Not one to sit still, he would soon become the Founder and CEO of Orion Financial Group, retiring for the second time at the age of seventy-one. During his entire time in the Dallas area, he was a pillar for his church, The Heartland Church in Carrollton. (Previously Christ Temple in Irving) The Church would benefit from his loyalty, support and leadership. The fellow congregants will be forever thankful for his dedication and faithful service. He would serve as Board Member, Business Administrator, Group Leader and Director of the Primetimers, the seniors group of the church. He oversaw numerous financial campaigns and served as a mentor to many, freely giving advice when requested. He and Mary Ruth enjoyed many trips and vacations. He was an avid sports fan and faithful follower of "the Fighting Irish". He loved a round of golf, and in his younger days, playing baseball, fastpitch softball and snow skiing. He and Mary Ruth were residents of Watermere in Southlake for the previous twelve years. In addition to Mary Ruth, he is survived by children; Steve Wileman, Terri Wileman Katz, Doug Wileman and his spouse Jill, Michael "Mike" Wileman and his spouse Deanne; grandchildren, Joshua Katz and his spouse Kandace, Ashli Katz and her fiance' Byron Blackwood, Whitney Wileman, Wes Wileman, Justin Wileman and his spouse Melinda, Kayla Wileman Sadler, and two great-grandchildren, Aurora and Bobby. Also by his sisters, Janet Rogers and Evelyn Hinton. In addition to his parents, he was preceded in death by brothers Billy and George. Ways to Watch: 1. Online at https://live.theheartlandchurch.com/ 2. Facebook at https://www.facebook.com/hcfamily/ 3. Livestream at https://livestream.com/heartlandchurch Please continue to pray for Mary Ruth Wileman and the entire Wileman family at this time.

The family of Walter "Walt" H. Wileman created this Life Tributes page to make it easy to share your memories.

Send flowers to the Wileman family.