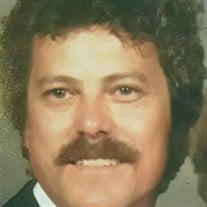 Stanley Dale Bolding, 70, a native of Plainview, Texas and long-time resident of Cedar Hill, passed away on Saturday, April 25, 2020 at his home surrounded by his family. Visitation: 1 to 3 p.m. Friday, May 1, 2020 at Guerrero-Dean Funeral Home, 500 E Main Street, Grand Prairie, 75050 where services will be conducted at 3. Burial: 9 a.m. Monday, May 4, 2020 at DFW National Cemetery. Stanley Dale Bolding was born on June 21, 1949, the son and youngest 4 children born to the late J B Bolding and the late Dorothy Faye Martin Bolding. As a young man, he would follow family to the D.F.W. area, living first in Mesquite, then Duncanville before finally settling in Cedar Hill. He and his wife, Marcene Lassiter Bolding, would live there for the rest of his life. Stanley was a mechanically minded man. He would have a fulfilling career working for defense contractors, most recently General Dynamics. He had a passion for understanding the way all machines worked. He enjoyed taking them apart, and then putting them back together again. Stanley could fix anything. He always had the best-looking yard and neatly trimmed shrubs. He enjoyed spending time in the garage, looking for something to tinker with. When time allowed, he enjoyed the occasional fishing trip. He is survived by his loving wife of thirty-nine years; Marcene Bolding; daughter, Amber Bolding; son, Clay Bolding; grandson, Ashton Kerley; brother, Ronny Bolding and his spouse Sue and uncle Glen and his spouse Becky and numerous nieces and nephews. In addition to his parents, he was preceded in death by baby Raquel, baby Stacy, baby Melissa Bolding and siblings, Charlotte Bolding Ballard and Jerry Bolding. The family would like to extend their gratitude to UT Southwest Dallas Oncology and The Good Shephard Hospice for their compasion and caring service. The family suggests donations in his honor be made to UT Southwest Dallas Oncology and/or Children's Medical Center of Dallas.

Stanley Dale Bolding, 70, a native of Plainview, Texas and long-time resident of Cedar Hill, passed away on Saturday, April 25, 2020 at his home surrounded by his family. Visitation: 1 to 3 p.m. Friday, May 1, 2020 at Guerrero-Dean Funeral... View Obituary & Service Information

The family of Stanley Dale Bolding created this Life Tributes page to make it easy to share your memories.

Stanley Dale Bolding, 70, a native of Plainview, Texas and long-time...

Send flowers to the Bolding family.