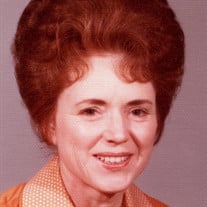 Ruby Christine Sessums Kinsey, age 89, from Grand Prairie, Texas drew her last breath surrounded by her family on Thursday September 3, 2020. Ruby, a feisty and fiery redhead, came into this world with a firecracker attitude; born on the 4th... View Obituary & Service Information

The family of Ruby Christine Kinsey created this Life Tributes page to make it easy to share your memories.

Send flowers to the Kinsey family.