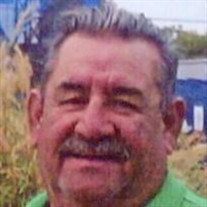 Robert H. Guerra, 67, a native and life-long resident of Dallas, passed away on Saturday, June 20, 2020 following a brief illness. Visitation: 6:30 to 8 p.m. Wednesday, June 24, 2020 at Guerrero-Dean Funeral Home, 500 E Main Street, Grand Prairie, TX, 75050. A private funeral service and burial will follow. Due to local county restrictions, all guest will be required to wear a mask. Robert Guerra was born on October 5, 1952, the son of the late Paul R. Guerra and the late Felipa Hernandez Guerra. He was raised in Dallas, beginning a lengthy career as a brick layer at the age of 14. He would marry Consuelo Gonzales and they would spend the next forty-nine years of life together. They would raise 6 children, and see the family blessed with in-laws and grandchildren. Robert retired in 2019, and was enjoying his time fishing at Joe Poole Lake. It was not unusual for him to come home from fishing, clean fish and serve fresh fried fish for dinner. Anytime spent with Robert was a treat for his family and friends. He was a faithful member for many years at Abundant Life Assembly of God Church in Grand Prairie. Survivors: wife, Consuelo "Connie" Guerra; children, Adam Guerra, Elizabeth Guerra Rodriguez and her spouse David, Cynthia Guerra Delgado and her spouse Bernadino, Rita Guerra-Nelson and her spouse Michael, Ruben Guerra and his spouse Vanessa; 14 grandchildren; 1 great-grandchild; siblings, Paul Guerra, Frank Guerra, Rosemary Guerra and Frances Rios. In addition to his parents, he was preceded in death by a son, Elias Guerra; siblings, Louis Reyes, Guadalupe Guerra, Daniel Guerra and Arthur Guerra.

The family of Robert H. Guerra created this Life Tributes page to make it easy to share your memories.

Robert H. Guerra, 67, a native and life-long resident of Dallas,...

Send flowers to the Guerra family.