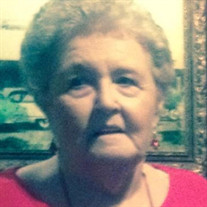 Norita Rushing Hicks, 82, loving sister, aunt, and friend, passed into eternal life on Wednesday, April 29, 2020 at an Arlington, Texas care center. Graveside Service: 12 Noon on Tuesday, May 5, 2020 at Leonard Cemetery in Leonard, Texas. Norita Hicks was born on January 11, 1938, the oldest of 3 children born to the late Floyd Herman Rushing and the late Lilly Lois Kuhn Rushing in Ladonia, Texas. The family would move to the Grand Prairie area when Floyd began working for a defense contractor, eventually concluding his career at Gifford Hill Inc. Norita and her brothers would attend schools in Grand Prairie, all graduating from Grand Prairie High School. Norita would marry the late Kenneth Hicks. Together, the would have one son, Marshel Scott Hicks. Norita was always a hard worker. Locals will remember the time she spent as a teenager, working as a cashier at Wyatt's Grocery Store (now Terry's) in Grand Prairie. She would work in the banking industry, retiring from Bank of America in Irving after more than twenty years of service. She would remain active, working in customer service for Pay lessShoes and a local thrift store. In addition to her parents, she was preceded in death by her son, Scott on March 4, 2018. Norita was a life-long member of the Church of Christ. She was a faithful attendee at Burbank Gardens Church of Christ before health issues forced her absence. The members of CrossPoint Church of Christ remained faithful friends, visiting consistently and faithfully. The family will be forever grateful for their encouragement to her. Survivors: brothers, Jerry Rushing and his spouse Sherry, Travis Rushing; nephew and niece, Chad Rushing and Angie Roland; great niece and nephew; Madison and Mason.

The family of Norita Rushing Hicks created this Life Tributes page to make it easy to share your memories.

Send flowers to the Hicks family.