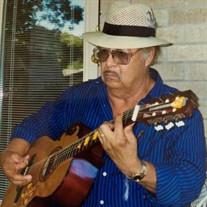 Nasario Rodriguez, 77, born in Ada, Ohio and long-time resident of Grand Prairie, passed away on Thursday, April 9, 2020 at a hospital in Arlington surrounded by his immediate family. A private family service will be conducted with burial following at Grand Prairie Memorial Gardens. Nasario Rodriguez was born on July 28, 1942, the 3rd of 4 children born to the late Antonio Rodriguez and the late Adela Martinez. They were long-time residents of Robstown, Texas where he would attend school, graduating from Robstown High School. One of his first jobs in high school was working as a cameraman, where he learned many valuable skills. Shortly after graduation, he would meet Lydia Cantu in Corpus Christi, Texas. They would marry and move to Dallas. Shortly after that, Nasario would have his parents, sibling and spouses move to Dallas to be near him. He would begin a career with Vought, working for thirty-seven years, retiring at the age for fifty-seven. He and Lydia would raise their 3 children in Grand Prairie. Their home was always full of happiness and fun. He loved cooking outdoors for his family, had a green thumb and an artistic side. A visit from grandchildren, (whom inherited his artistic gifts) was always a special and happy time. He had a strong passion for his sports teams, especially the Dallas Cowboys. You never had to ask who his favorite team was. He and Lydia enjoyed traveling, taking over 7 cruises in the past few years. Before his health started to decline, he attended Mass at St. Michael the Archangel Catholic Church, where he was a member. Survivors: wife of fifty-four years; Lydia Cantu Rodriguez; children, Priscilla Rodriguez, Nasario Rodriguez Jr and his spouse Catia Castagna-Rodriguez, Gabriel Rodriguez and his spouse Tiffany Rodriguez; grandchildren, Sara Elena Rodriguez, Serena Rose Rodriguez, Roman Gabriel Rodriguez, Joao Pedro Rodriguez; siblings, Guadalupe Villarreal, Leon Rodriguez and his wife Olivia, Antonio Rodriguez Jr and his wife Alicia. In addition to his parents, he was preceded in death by a brother-in-law, Rodolfo Villarreal.

Nasario Rodriguez, 77, born in Ada, Ohio and long-time resident of Grand Prairie, passed away on Thursday, April 9, 2020 at a hospital in Arlington surrounded by his immediate family. A private family service will be conducted with burial following... View Obituary & Service Information

The family of Nasario Rodriguez created this Life Tributes page to make it easy to share your memories.

Send flowers to the Rodriguez family.