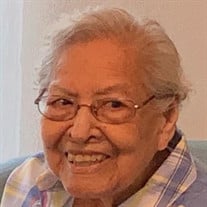 Marie De La Rosa, loving mother, grandmother, sister and dear friend, passed into eternal life on Sunday, April 12, 2020 just 4 days after her 97th birthday. In lieu of flowers, the family request donations be given in her name to the Alzheimer's Foundation of America, https://alzfdn.org. A family visitation will occur, followed by a private burial with her husband at Fort Sam Houston National Cemetery in San Antonio. A public Memorial Service will follow at a later date. Marie De La Rosa was born on April 8, 1923 in Hondo, Texas, the daughter of the late Jose Guerrera and the late Nieves Flores Guerrera. She was the only daughter and 2nd of six children, born and raised around the Crystal City area. At the age of twenty-three, she would marry the late Arnulfo De La Rosa and remain his loving wife for the next fifty-seven years. The wife of a career military man, she would live in various locations across the United States and in Germany. They would make their permanent home in Austin, Marie living there while Arnulfo would be stationed away from the family. He would pass away on December 26, 2003 after fifty-seven years of marriage. Her skills in the kitchen were amazing. It was always a joy to have one of her meals. Arnulfo's military friends would ask when she would be making enchiladas again. She loved traveling, and looked forward to the two or three annual trips to Nevada. She was an avid reader, and enjoyed working on her puzzles. She is survived by her daughter, Yolanda De La Rosa Cammarota; grandchildren, Michelle Cammarota, Anthony "Tony" Cammarota and his spouse Dorianne, Patrick De La Rosa and his spouse Tonya, Vanessa Robles and her spouse Steven, Nora Robles and her spouse Daniel; great-grandchildren, Mia, Ian, Soren, Jenna, Grace, Francis, Mariah, Patrick Jr, Adelina, Raiden and a brother, Raymond Martinez. In addition to her parents and husband, she was preceded in death by a son, Ruben De La Rosa in 2009.

Marie De La Rosa, loving mother, grandmother, sister and dear friend, passed into eternal life on Sunday, April 12, 2020 just 4 days after her 97th birthday. In lieu of flowers, the family request donations be given in her name to the Alzheimer's... View Obituary & Service Information

The family of Marie De La Rosa created this Life Tributes page to make it easy to share your memories.