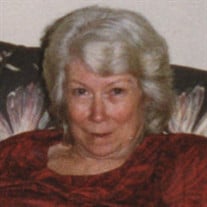 On October 31st, 2020, Lola Belle Webster joined our loving Father after living a very fulfilling life. She was a wonderful wife, strong mother, and brave woman who took on the challenge of multiple strokes head on starting from June 1st, 2011. She vowed to never be unable to smile even against the biggest trials. In life, she was a strong and joyous person and in passing, I know she is cracking jokes about her children now to St Peter. Visitation: 4-8 P.M.Friday, November 6, 2020, at Guerrero-Dean Funeral Home, 500 E. Main Street, Grand Prairie, TX, 75050. She was a hard worker with a kind spirit. She held a beautician’s license for over thirty years. Ever adaptable, she prided herself on the ability to learn new techniques and technologies, going as far as continuing education in her 60’s. Never one to be overlooked, she worked her way from being a cashier at a wholesale company to being the executive secretary for the owner. Her compassion knew no limits. Her devotion to faith guided every fiber of her being, whether it was physical in helping her church communities or guiding lost souls with her advice and experiences. She encouraged us to follow our dreams and supported us through faith. She believed that God should always come first and to keep our eyes on the sparrow. Lola Belle Webster was a loving sister, wife, mother, and grandmother. She nursed one husband through terminal illness, raised a child as a single mother, held her heart open for many friends who became family over the years, whom are here today. She is preceded in death by her mother, Willie Belle Stokes, father, Derwood Davis Stokes, brother, Robert Andrew Stokes, David Stokes, Melvin Stokes, sister, Evelyn Kuech, step-daughter Selita Tucker and spouse Roy Tucker, step-grandchildren LaDawn Mooney and Marian Tucker. She is survived by her Husband Harold Glenn Webster, daughter Yolonda Mooney, Stepson Marvin Mooney and spouse Beatrice, Lon Martin and spouse Dorthey, Grandson Richard Mooney, Michael Ivy Jr. and a host of many others.

On October 31st, 2020, Lola Belle Webster joined our loving Father after living a very fulfilling life. She was a wonderful wife, strong mother, and brave woman who took on the challenge of multiple strokes head on starting from June 1st, 2011.... View Obituary & Service Information

The family of Lola Belle Webster created this Life Tributes page to make it easy to share your memories.

Send flowers to the Webster family.