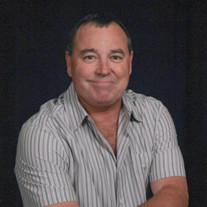 Johnny Charles Williams, 69, loving husband, father, grandfather, brother, and follower of Christ, passed away on Saturday, April 9, 2022 following several years of health issues. Memorial Service: Saturday, April 16, 2022 at 11 a.m. at South Park Baptist Church, 401 W. Warrior Trail, Grand Prairie, Texas, 75052. Pastor Randy Capote will officiate. Johnny Williams was born in the Texas Panhandle in McLean, Texas on April 7, 1953, the son of the late Charles Nathan Williams and the late Dorothy Lowe Williams. He would leave school early to help his mother support the family, doing whatever he could to help. In February of 1983, he would marry Sheila Graves. She would be his trusted companion for the next thirty-nine years. He became a skilled home painter, working for various custom home painters. His journeyman talent was appreciated by several contractors until he accepted a job with the school district. He worked in the maintenance department for fifteen years, working his way to become a supervisor. Family was everything to Johnny. When health allowed, he enjoyed going on hunting trips with his son Jerod Williams. He relished the opportunities to spend time with granddaughters. He was a proud and doting grandpa. He enjoyed being in the outdoors and going on multiple trips to Red River, New Mexico. Survivors: wife, Sheila Graves Williams; sons, Derek Brisendine and his spouse Collette, Jerod Williams and his spouse Nicole; granddaughters, Kaylee Williams, Katelyn Williams, Jane Brisendine, Eve Brisendine; sisters, Donna Fuller and her spouse Kelly, Terrisa Coffman and her spouse J.D. In addition to his parents, he was preceded in death by a brother, Ronny Williams.

The family of Johnny Charles Williams created this Life Tributes page to make it easy to share your memories.

Send flowers to the Williams family.