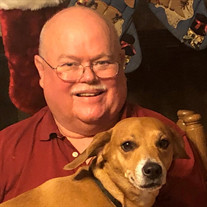 James Flinn Scott, 67, a loving son, husband, father and Pepaw, passed away peacefully on Sunday, November 1, 2020, after a brief illness. James was born on November 19, 1952 to Sherman Flinn Scott and Allene Virginia Scott in San Diego, California. Those left to cherish his memory are his beloved dog, Shiloh, his wife of 47 years, Altha Faye Scott, daughters Althea Barry of Abilene, Texas and Jamie Scott Wiggins of Grand Prairie, Texas. His three grandchildren, Jackie Barry, Kaycee Scott and Kayden Wiggins. His two sisters, Shirley Hall and husband, James Hall Sr and Patricia Prescott. His sister-in-law, Johnnie Brown and husband Jerry Brown. Nieces, Bonnie Gafford, Meridith Hayes, Erin Berg, Margaret Brown and Patsy Burlesmith, and one nephew, James Hall, III along with many other extended family members. He is preceded in death by his parents and brother-in-law, Steve Prescott, and his beloved horse, Coyote. James began working in retails stores at a very young age alongside his Dad. In 1972 he was working at Tom Thumb where he met Altha and where the nickname “Fred” for her was born by James. He went on to be a Schematic Analyst in the Albertsons Office and was still working up until his death doing resets for various stores in the area. Some of his greatest friends and memories were with his loving coworkers at Albertsons, Tom Thumb, Winn-Dixie, Minyards, Fiesta, Gordon, Crossmark, Acosta, and Advantage. James lived a life of giving and helping others. He volunteered and helped found the Girl Scout Equestrian Program, the Tejas Riders, at Camp Bette Perot. He spent many nights and weekends filming for the SGP basketball teams for the players and coaches. His true legacy lives through his knowledge to fix anything. No matter what hour of the day you needed something, everybody called James and he was there for you. From fixing your car, changing your tire, or fixing a hot water heater, or a ceiling fan, he was always there for you in your time of need. Guerrero-Dean Funeral in Grand Prairie,Texas are handling the arrangements. Visitation will be held on Thursday, November 5, 2020 at 6:00 pm - 8:00 pm. Funeral will be held on Friday, November 6, 2020 at 12:00 noon.

The family of James Flinn Scott created this Life Tributes page to make it easy to share your memories.

Send flowers to the Scott family.