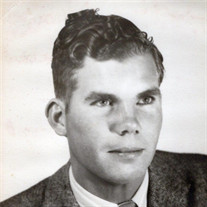 James Carl “Bill” Nix, 94, retired truck driver, died Wednesday, Aug. 12, 2020. Bill was a child of the Depression and a member of the Greatest Generation. He was a veteran, a cowboy, a truck driver, a son, a brother, a husband, a father and “Grandan” to his only granddaughter Riley. SERVICES: Visitation 11-1 p.m. Monday, Aug. 17 at Guerrero-Dean Funeral Home, 500 E. Main St., Grand Prairie, with burial at 2 p.m. at DFW National Cemetery in Dallas. MEMORIALS: In lieu of flowers, the family requests donations to the Cleveland Amory Black Beauty Ranch in Murchison, Texas. Bill Nix was born in the Dickens County town of Spur, Texas on March 24, 1926, the third of four children of Omer Newton Nix and Farrah Valentine Nix. At the age of five, he decided he would name himself Bill after a family friend. As a young child, he picked cotton on his uncle’s land outside of Lamesa in West Texas. His youngest sister Betty would tag along. She followed her big brother everywhere, including down the aisle at church as they accepted Jesus Christ as their savior. In addition to working with his father on farms in Spur and Clyde, Texas, Bill worked as a cowboy on the famous Pitchfork Ranch and as a wheat harvester throughout Texas, Oklahoma and Kansas. He was drafted into the U.S. Army in 1944 at age 18 and destined for the Pacific Theater, but luckily for us, the war ended while PFC Nix was in Hawaii waiting to be shipped out to battle as cannoneer. After the war, he went home to Spur and eventually moved to Fort Worth, soon followed by his parents and Betty. He worked at General Dynamics and in construction. In the spring of 1954, Bill met a sweet young woman at a dance hall on Fort Worth’s Northside where he and his friends would go to see the likes of Bob Wills and the Texas Playboys perform. Almedia Riley introduced herself to the tall, handsome man. They dated, but nothing came of it until Bill moved to Evergreen, Colo., to wrangle horses at a summer youth camp. They started writing to each other and the romance blossomed. They married Dec. 18, 1954 in Fort Worth and were together 62 years, until Almedia died on Jan. 7, 2017. They celebrated their 50th wedding anniversary in 2004 on “Bill and Almedia Nix Day” as declared by the mayor of Grand Prairie. They lived in Fort Worth until they moved to Grand Prairie in 1960. They bought a home three years later, and Bill lived there until his death. Bill did some long-haul trucking but eventually got a job with Texas Delivery Service in Dallas for local deliveries. The company for many years had the contract to deliver voting machines in Dallas County. Dad never missed voting, including the last few years of his life when he used mail ballots because he couldn’t make it to the polls. If he were around today, he’d advise everyone to register and exercise their right to vote in November. The couple had two daughters, Mede and Carla, and he was very proud of them. Carla, his namesake, moved in with him after Almedia died and served as his loving caregiver for the last three years of his life. Dad loved sports, and even pseudo sports. He took preschool Mede to wrestling matches and roller derby at the North Side Coliseum in Fort Worth. He also taught Mede to throw a football and run pass patterns in the backyard and to shoot hoops. When Mede was five years old, he took her to her first football game to watch the Cowboys play, sitting in general admission in the end zone. He also took her to the first Rangers game in Arlington Stadium, sitting in the outfield, of course. Watching the Cowboys on Sunday afternoons was always a family ritual. He was a big fan of the Dallas Mavericks too, and he’d even watch hockey from time to time. But he also was a big critic of poor play by his teams, often saying, “I could do that good,” when an interception was thrown or a home run given up. Every summer, he took us on family road trip vacations -- usually to Colorado -- where he would pretend that he was going to drive off a mountain on a steep winding road, mostly to mess with Almedia. Bill was a good neighbor, sharing the fruits of his bountiful garden each year and helping his neighbors with mowing and other chores. He loved kids and was always happy to see the grandchildren of his nieces and nephews. He finally got a grandchild of his own when Riley came along. His last road trip was to see Riley graduate from Texas State University in 2013. Dad also loved dogs, with Pepper, Smokey, Bear and Patches preceding him. Niko, Snoopy and Tiger are already missing him and the treats he would throw them from his bed. In addition to his wife and parents, Bill was predeceased by his sisters Betty Bryant, Wilma Dee Ross and Velma Holman. He is survived by his daughters, Mede Nix and Carla Nix of Grand Prairie, granddaughter Riley Nix and granddaughter-in-law Kim Block and great grandson Sylvan Block of Austin.

The family of James Carl Nix created this Life Tributes page to make it easy to share your memories.

Send flowers to the Nix family.