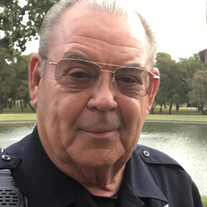 Jack Lee Guthrie Jr.,74, of Grand Prairie, Texas, passed away peacefully Thursday, December 9th, 2021, with his family by his side. He was born on January 18, 1947, in Waxahachie, Texas, to the late Jack Lee Guthrie Sr. and the late Dorothy Abbott. In 1966 after graduation, Jack would enlist in the United States Airforce where he was deployed to Vietnam as an Air Traffic Controller. Upon on returning home from the service Jack decided to go into law enforcement and enrolled in the police academy. He would start his career with the Italy Police department where he would work his way up to Chief. A short time later Jack decided to start a construction company and become a general contractor. He had a craft for working with wood and loved to complete the detailed finish-out projects. People say that Jacks skills were so great that most if his business was word of mouth and repeat customers. After 25 years of being self-employed, Jack decided to return to law enforcement where he would serve on the Dallas County Community College Police Force, for more than 16 years. In 1975 Jack become an ordained minister. He loved to witness to people and share the word of God every chance he got. In fact, one of his favorite things to do on Sundays, was preach the gospel at the Salvation Army and help those in need. Jack was a humbled giver, and servant. He loved to serve others, he loved to serve the community, and he loved his family. During his spare time, Jack would tinker with different things, but more especially, he loved taking his boys and grandchildren to the gun range and practice shooting. Jack made many friends along the way in life, but in 1974 he would marry his ultimate best friend. Jack shared 32 years with the love of his life, Cathy Conner. Jack is preceded in death by his parents. He is survived by his son, Rodney Guthrie, and wife Zina; daughter, Kellie Guthrie; son, Aaron Guthrie, and wife Vangie; grandchildren, Justin, Jacqueline, Kayleigh, Aaron Jr. (AJ); great grandchildren, Emerson, Jett; Life Friend, Cathy Conner, and a whole host of family and friends. Jack’s body will lie in state at the funeral home, Tuesday, December 21, 2021, from 9 a.m. to 3 p.m. The family will receive friends from 5 p.m. to 6 p.m. at City Chapel Church, 4015 I-20 Frontage Rd, Arlington, Texas 76017. The Funeral Service will follow at 6 p.m. Burial will take place Wednesday at 11:15 a.m. at the Dallas Fort Worth National Cemetery, 2000 Mountain Creek Pkwy, Dallas, Texas 75211. Arrangements entrusted to Guerrero-Dean Funeral Home under the direction of Aaron King, Funeral Director.

Jack Lee Guthrie Jr.,74, of Grand Prairie, Texas, passed away peacefully Thursday, December 9th, 2021, with his family by his side. He was born on January 18, 1947, in Waxahachie, Texas, to the late Jack Lee Guthrie Sr. and the late Dorothy... View Obituary & Service Information

The family of Jack Lee Guthrie Jr. created this Life Tributes page to make it easy to share your memories.

Send flowers to the Guthrie family.