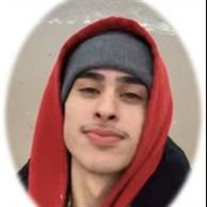 Hector Maldonado, 18 of Irving, Texas died Sunday, February 6, 2022. Hector was born and lived in Eagle Pass until the age of 4, since then has lived in Grand Prairie, Texas. At an early age he showed his love for fishing, catching his first fish before the age of 2. He preferred the outdoors over video games. At a young age he played t-ball, was in boy scouts, boxing, and soccer. Despite the extra curricular activities he still had a lot of energy. He loved to spend his summer breaks in Eagle Pass/Jimenez, Coahuila with his maternal grandmother where his passion for fishing would excel. Hector was a fearless, hard working, goofy, creative (always creating something out of nothing) and nonstop energized boy, always keeping his mom and his four sisters on their toes. Even though he was the youngest and the only boy, his sisters looked up to him as their father figure. Being the only boy in his mother’s and sister’s lives, he was always spoiled and loved. In their eyes he was a handyman, mechanic, painter, exterminator, and most importantly their protector. To his mom he was her baby and everything to her. He didn’t mind sitting on her lap to give her the feeling of holding her little boy and never ashamed of saying “I love you ma.” His sisters would call him at all hours of the day when they had car trouble, boy problems, or even when they just needed a shoulder to cry on or a partner to smoke with. He was never embarrassed to ride his bike to the store to buy them personal hygiene products. At times he conspired with his sisters to prank their mom for a good laugh from time to time. He showed his loved for his nieces and nephews by picking on them; constantly telling them “I’m gramas baby!” Still, he didn’t mind babysitting from time to time. When hanging out at family cookouts he didn’t mind being the grill master. As a teenager, he was eager to turn 16 to start his first job, but didn’t want to settle for an after school job. He made a big decision to leave school to help his mom and start the “hard labor work” in construction, framing and occasionally tattooing on the side. By this time he had already formed brotherly ties with all his brother-in-laws and they became the brothers he never had. At the age of 17 his brothers (Xavier, Bryan, and X) and himself drove to North Carolina and started a job installing solar panels. During that time he left his other brother, Angel, the responsibility of taking care of his family while he was away. His family celebrated his 18th birthday in his hometown. Hector was surrounded by all his loved ones on that special day. Although he leaves his loved ones heartbroken his memories will give them the strength they need to keep his memory alive. Hector, ILY2TM&B2I&B4E&E, Love Mom & Sisters. “HOW CAN THE DEAD BE TRULY DEAD WHEN THEY STILL LIVE IN THE SOULS OF THOSE WHO ARE LEFT BEHIND? Visitation will be Friday, February 18, 2022 at Guerrero-Dean Funeral Home, 500 E. Main Street, Grand Prairie, Texas from 4:00 p.m. until 8:00 p.m. Hector is survived by his mother, Maria Maldonado, sisters, Kimberly Valdez and spouse Xavier Aguilera, Abby Maldonado, Kelsey Maldonado and spouse Bryan Acosta, Ashlie Maldonado and spouse Xavier Aguilar, grandparents, Gloria Valdez and Laco Rosales, great-grandmother, Lola (Wela) Ibarra, nephews, Xavier Aguilera, Jr. and Xavier Aguilar, nieces, AriBella (Belly Bell), Skylar (Kymo), Reyna (Reyrey), Nidia (Nini), Kataleya (Katty), Valentina (Tin Tin), numerous aunts, uncles, cousins and extended family.

Hector Maldonado, 18 of Irving, Texas died Sunday, February 6, 2022. Hector was born and lived in Eagle Pass until the age of 4, since then has lived in Grand Prairie, Texas. At an early age he showed his love for fishing, catching his first... View Obituary & Service Information

The family of Hector "Ito" Maldonado created this Life Tributes page to make it easy to share your memories.

Send flowers to the Maldonado family.