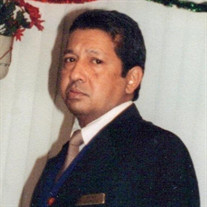 Hayden Joseph Rodrigues was born on December 5th, 1949. He was the only child born in Bombay, India(Mumbai), to Violet and John Rodrigues. He was a gift to his mother as they shared the same birthday. He was a devout Catholic and was raised in St Anthony's Catholic Church and school. St. Anthony was also his patron saint. He was married to Yvonne Thelma Rodrigues, and chose to be married on the same wedding day as his parents on October 15, 1977. He and Yvonne were high school sweet hearts at age 16 and celebrated their 43rd anniversary this year. Hayden was a hard worker who provided for his family. After marriage he worked in Doha, Qatar, and then moved his family to the US. He worked up to three jobs to provide for his family. In 2009 he retired as an accountant from Citi Group. Hayden was like his father and a lover of music and could play any instrument by ear. He was the life of the party. He was a loving, devout, faithful and irreplaceable father and husband. His mother owned a catering business and like her he had a passion for cooking. He would cook for parties, friends and his loved ones. He was like a father to those around him and gifted with a contagious loving personality that brought people together. He had a heart of gold and would help anyone who needed it. He had faith in God and a love for humanity. Even after death from the tree outside his home, squirrels and birds are staring into the window waiting for him to feed them. He had a love for life, a love for people and all God's creatures. He showed his family the world, and traveled to many countries and 6 continents. He made friends and had family all over the world, who will be online saying farewell to the most loving, kind, generous and humble gentleman. He kept in touch and entertained people through Facebook, which many through out the world have expressed their sympathy for our loss. Hayden will always be known as a kind, God-fearing, true gentleman. He leaves behind his wife Yvonne Thelma and daughter Joann JoJo Rodrigues. He left this earth at 3:36 p.m. on December 30,2020, to be with the Lord. He has left an imprint on the hearts of those he loved that will live for ever. In lieu of flowers, gifts may be made to St. Jude Children's Research Hospital, www.stjude.org/donate; or Doberman Rescue of North Texas, www.dobermanrescue.org. Services: A visitation will begin at 9 a.m. on Saturday, January 9, 2021, with a Rosary at 9:30 a.m. and Mass at 10:00 a.m., all at St. Michael the Archangel Catholic Church in Grand Prairie. Interment will follow at Grand Prairie Memorial Gardens.

Hayden Joseph Rodrigues was born on December 5th, 1949. He was the only child born in Bombay, India(Mumbai), to Violet and John Rodrigues. He was a gift to his mother as they shared the same birthday. He was a devout Catholic and was raised... View Obituary & Service Information

The family of Hayden Joseph Rodrigues created this Life Tributes page to make it easy to share your memories.

Send flowers to the Rodrigues family.