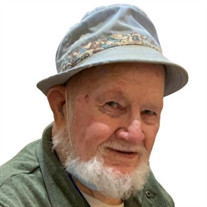 Harold Glenn Webster Harold "Glenn" Webster, 90, a native of Tulsa, Oklahoma and resident of Grand Prairie, passed away peacefully on January 20, 2022 at his home in Grand Prairie. Services: February 12, 2022, 12 Noon at Guerrero-Dean Funeral Home, 500 E Main Street, Grand Prairie, TX, 75050, Glenn Webster was born on February 26, 1931, the oldest son of the late Harry T Webster and the late Alice M Hamby Webster. He was raised in Oklahoma then in Texas before finally settling in the Dallas area when he became a young adult. He retired after working more than thirty-six total years for the City of Dallas. He was always busy and could be characterized as a workaholic. He loved working on old cars, fishing, and giving wise advise when requested. He was proud to be mentally sharp and able to work, even after the age of 90. There was also a special place and love in his heart for dogs. Watching old John Wayne movies was a favorite pastime. He is survived by daughter, Brenda Neyra (Derrick Demers); grandchildren David G Sims, and Katherine Neyra–Carter (Rick), great granddaughters Meghan and Hannah, step-daughter Yolonda Mooney; grandson; Richard Mooney. He was preceded in death by his parents Harry and Alice, siblings, Virginia Barnett, Georgia Cromeans and Robert Webster who died as an infant, grandson Jonathan Neyra, wife of twenty-one years, Lola Belle Webster (1999), and previous wives Dorothy B, Webster (1977) and Mary R Webster (1951).

The family of Harold Glenn Webster created this Life Tributes page to make it easy to share your memories.

Send flowers to the Webster family.