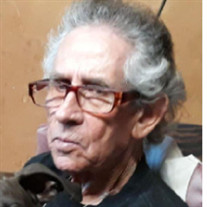 Gary Jackson Pinson Sr., a native of Cheyenne, Wyoming, long-time resident of Grand Prairie, passed away on October 10, 2020. Visitation: 4 to 8 p.m. Tuesday, October 20, 2020 at Guerrero-Dean Funeral Home, 500 E Main Street, Grand Prairie, TX, 75050 where funeral services will be conducted at 6. A private family burial will follow at DFW National Cemetery. Gary Jackson was born on January 12, 1943, the oldest of 4 children born to the late Edward Jackson Pinson and the late Estella Mae Adams Pinson. He would enter the US Army in 1962 and serve honorably until 1965. His occupational career would be spent in the defense industry, where he worked as a machinist. His employment would span time with LTV, Vought and several others. Gary was an avid outdoors man, enjoying hunting, fishing and camping. He was an collector, with collections of pocket watches, knives, cars and cards. He was a joy to know, and enjoyed the opportunity to make others laugh. He sudden passing leaves a sorrow for all who know him. He is survived by his wife, Shirley June Seago Pinson; Leslie Pinson Diggs, Theresa Pinson, Shirley Pinson Nelson and her spouse Billy, Gary Jackson Pinson; 13 Grandchildren; 5 great-grandchildren; sister, Katherine Anderson and her spouse Paul and a brother, Billy Pinson. In addition to his parents, he was preceded in death by a brother, Jack.

The family of Gary Jackson Pinson created this Life Tributes page to make it easy to share your memories.

Send flowers to the Pinson family.