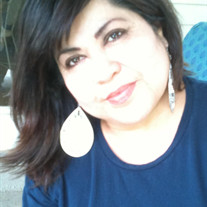 Elvira Dena Palomo, 60, beloved wife, mother, grandmother, sister, and faithful servant of Jesus Christ, entered into the joy of her eternal home on Thursday, September 17, 2020 following a brief illness. Visitation and Funeral Services will be conducted on Tuesday, Sept. 22, 2020 at Trinity Church Fairmeadows, 734 Cavan Road, Duncanville, TX, 75116 at 12 noon. Public viewing is from 11-12. Burial at 3pm at Grand Prairie Memorial Gardens. Elvira Dena Palomo was born on June 27, 1960 in Mexico, the 3rd of 8 children born to the late Juan Dena and the late Maria Gallegos. She would move to the United States at the age of 3 where she would excel in school. She would graduate from the Latin America Bible Institute and also Southwestern Assemblies of God University in Waxahachie, receiving B.A. degree of Christian Education. She taught kindergarten in Grand Prairie Independent School District for more than twenty-four years, earning many accolades, including teacher of the year in 2006 and 2017. Elvira was a dedicated Christian, serving as a missionary to Mexico through an organization she helped establish, Beautiful Feet. She was also the co-founder of Ministerios Luz Para El Mundo Inc. Survivors: spouse of thirty-five years, Rev. Daniel Palomo; children, Isaac Palomo and his spouse Rose, Aaron Palomo and his spouse Katherine, Rebecca Palomo and her fiancé' Nathen Smith; grandchildren, Alexander, Karissa, Jacquelyn, Matthew and one on the way; siblings, Jaime Dena and his spouse Maribel, Elizabeth Dena Flores and her spouse Valentino, Isaiah Dena and his spouse Shari, Eli Dena and David Dena and his spouse Magdalena. In addition to her parents, she was preceded in death by brothers, Jessie Dena and Moses Dena.

The family of Elvira Dena Palomo created this Life Tributes page to make it easy to share your memories.

Send flowers to the Palomo family.