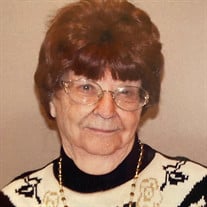 Eleanor Berdina Carlson Chapman Burrow went to her reward on June 17, 2021. Eleanor was born to LeRoy and Dorres (Beagley) Carlson on a ranch near Attica, Kansas on January 29, 1921. In 1924 her family moved to Panca City, Oklahoma where her father worked for the E.W. Moreland Refinery Company. In 1927, they moved to a ranch in Freedom, Oklahoma where Eleanor grew to womanhood. Eleanor attended a rural country school, Freedom High School and Northwestern State Teachers College in Alva, Oklahoma. Eleanor worked for the Selective Services System enlisting the young men. She was the legal secretary for a law firm and for the Flour Mills of America. Then as head accountant for the Bethel Dempsey Price. While working for Captain Kay in the POW camp, she married Newell O Chapman in 1944, and gave birth to Lois Louise Chapman in 1946 before she purchased a cafe in Alva. In 1947, Eleanor moved to Brownwood and in 1948 moved to Dallas. In 1954 she gave birth to Terry Lee Chapman. Eleanor worked as head of an accounting Department in LTV. Then entered the construction industry working for Noble Hurley and Co, Payne and Howard, and Pan Buell Construction company retiring in 1984. Eleanor was a member of several organizations among which was Women in Construction, Credit Reporting company, and AARP. She did volunteer work with the GP Police Department, Brighter Tomorrows, and GP Nutrition Center. Married Ernest Burrow in 1971. Eleanor was a member of Lookout Methodist Church, 1st Methodist Church in Alva, 1st Baptist Church in Alva, 1st Baptist Church in Irving, South Park Baptist Church in Grand Prairie where she and her husband taught the 5/6th Sunday School class and was member of Indian Hills Baptist Church. Eleanor is proceeded in death by husband of 23 years Newell Chapman, husband of 25 years Ernest Burrow. Her parents Le Roy and Dorres Carlson, and brothers; Leonard Carlson, and Gilbert Carlson, stepdaughter Retha Faye Brown, son Terry Lee Chapman, stepson Newell Chapman Jr. and grandson Jimmy Newell Chapman. Eleanor leaves to mourn her passing daughter Louise Smith and Husband Roy, 5 grandchildren, 11 great grandchildren, and 5 great-great grandchildren and dear friends, Barbara, Charles and Tim Yaws. Visitation will be Tuesday, June 29, 2021 at Guerrero-Dean Funeral Home, 500 E. Main Street, Grand Prairie, Texas 75050 from 10:00 a.m. until 11:00 a.m. with a funeral service to starting at 11:00 a.m. Burial will follow at Southland Memorial Park, in Grand Prairie. In Leu of flowers the family ask that a donation be made to the American Heart Association In Eleanor's name, or a organization of your choice. Arrangements entrusted to Guerrero-Dean Funeral Home under the direction of Aaron King, Funeral Director.

Eleanor Berdina Carlson Chapman Burrow went to her reward on June 17, 2021. Eleanor was born to LeRoy and Dorres (Beagley) Carlson on a ranch near Attica, Kansas on January 29, 1921. In 1924 her family moved to Panca City, Oklahoma where her... View Obituary & Service Information

The family of Eleanor Berdina Burrow created this Life Tributes page to make it easy to share your memories.

Eleanor Berdina Carlson Chapman Burrow went to her reward on...

Send flowers to the Burrow family.