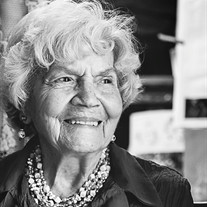 Dovie Whiteker Pittman, 100, a native of Meridian, Texas and long-time resident of Grand Prairie, Texas, passed away on Saturday morning, April 9, 2022 at her home. Visitation: 10:30 to 12 p.m. Thursday, April 14 2022, followed by funeral services at 12. A family burial will occur at DFW National Cemetery. Dovie Whiteker Pittman was born on February 10, 1922, the daughter of the late Oscar Whiteker and the late Janie Graham Whiteker in the small central Texas town of Meridian. She spent the early years of her life in Haskell, Texas. She would marry Walter Lee Pittman on November 1, 1941 and spend the next eighty years of life with him. They would establish a home in Grand Prairie in 1951 where they would raise their sons. They would also become members of Calvary Baptist Church where they still remain members today. Dovie and Walter had a strong desire to serve the hearing-impaired community of Grand Prairie. They would drive individuals to Dallas for a time before beginning a ministry for the deaf at Calvary. She would also teach at Arlington Baptist College for fifteen years before her retirement. Dovie was a faithful Christian with a heart for serving others. One of her favorite scriptures comes from III John 4. (I have no greater joy to hear that my children walk in truth.) Survivors include her husband of eighty years: Walter Lee Pittman; sons, Dwight Pittman and spouse Joy Meece and the mother of his children, Mary Pittman, Gary Pittman and spouse Donna the mother of one of his children, Nancy Pittman mother of his two sons, Randal Pittman and spouse Annette, Mamie Sue Wilcher mother of his child; grandchildren, Brian Pittman, Forest Pittman and spouse Colleen, Lance Pittman and Marguerite mother of their two children, Matthew Pittman and his spouse Tabitha; Abbie Pittman, Theresa Svajian and spouse Greg; great-grandchildren, Molly Stanford and spouse Mark, Josie Pittman, Sam Pittman, Violet Pittman, Katie Svajian, Kylee Svajian, Kenzie Svajian; great-great grandchildren, Mark and June Stanford.

The family of Dovie Pittman created this Life Tributes page to make it easy to share your memories.

Dovie Whiteker Pittman, 100, a native of Meridian, Texas and...

Send flowers to the Pittman family.