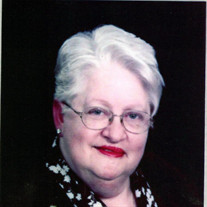 Donna Gail Terlisner, 73, passed away on Sunday, May 17, 2020. Gail was born on April 7, 1947 in Dallas, Texas. Funeral: 10 a.m. Saturday, May 30, 2020 at Guerrero-Dean Funeral Home. Burial: 10:30 a.m. Monday, June 1, 2020 at DFW National Cemetery in Dallas, Texas. Donna Gail Smith Terlisner was born April 7, 1947, the oldest of 2 children. She was a long-time resident of Grand Prairie and retired employee of UT Southwestern Medical Center where she worked in the medical library. Her faith, love for God, family, church and Eastern Star were the most important things in her life. Her commitment to each was unmatched. She cared deeply for her daughters and grandchildren. Many hours were spent volunteering at her church, Inglewood Baptist Church. She most recently had been active with the widows luncheon at Inglewood and leading a Bible Study. She was a member of the Eastern Star for more than fifty years. She served in all capacities, including Worthy Matron. She was an avid reader, and at the decline of her health, spent many hours keeping up to date with everyone via Facebook. In addition to her parents, she was preceded in death by her husband of thirty-one years, Anthony T. Terlisner and a son, Timothy Dalton. Survivors: 3 daughters, Randi Terlisner of Temple, Donna Dixon and husband Keith of Temple, Andrea Graham and husband Jeff of Dallas; 1 son, James Terlisner of Belton; 16 grandchildren; 17 great-grandchildren and a brother, Garry Smith.

The family of Donna Gail Terlisner created this Life Tributes page to make it easy to share your memories.

Send flowers to the Terlisner family.