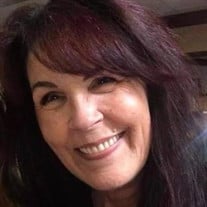 Deborah Lyle Potter Richards, 70, loving mother, grandmother, sister, aunt and friend, passed peacefully on January 17, 2022 surrounded by her family. Deborah was born April 14, 1951 in Dallas, TX to the late Milton Louis Potter and the late Laura Frances (Thompson) Potter. Preceded in death by her beloved brother, Michael Potter, affectionately known as Cubby. She was a lifelong resident of Grand Prairie, TX. Deborah was part of Grand Prairie High School class of 1969; earned her cosmetology/hair stylist license in 1965, and later completed an Associate of Arts degree in Biblical Theology from Cornerstone University. She was a homemaker and excellent cook. A devoted follower of Jesus Christ, Deborah was active in several Grand Prairie churches throughout her lifetime. She worked as the church Secretary at Burbank Gardens Church of Christ and Vineyard Christian Fellowship. She served as the treasurer for Grand Prairie United Charities for several years. The absolute joy of Deborah’s life was children. Her son, Jamie, and his children were the light of her life. In addition to her son, grandchildren, and great grandchildren, all of her family’s nieces and nephews (~30) were adored by Debo, and the adoration was mutual. She made each one feel as though they were her favorite. She had ongoing, daily texts with many of them. This past Thanksgiving, she was unable to cook, so coached one of our nephews, Jacob, through the process of making our grandmother’s cornbread dressing, a favorite dish which she contributed to our Thanksgiving meal for many years. She would play board games with her great-grandson, Elijah, over face-time in order to spend time with him. All of the kids loved her large shadow box, with a collection of miniature items. She also maintained a close bond with her sisters and brothers-in-law, and many treasured life-long friends. Debo’s hobbies were singing and music, cooking, writing, gardening and delighting in nature. She especially loved family times of harmonizing around the piano to hymns. Anyone who knew her enjoyed her sharp wit and keen sense of humor. She was a child of the 60’s – she loved the Beatles and could make a mean bee-hive hair-do. She was a sensitive soul in this sometimes harsh, often cruel world. She could not stand mistreatment of another human being – her empathy was so great it was like she could feel it herself. Debo’s strong faith was her cornerstone and her anchor. When we would talk about any looming problem she would say, “We are not going to worry, but trust God!” She was a “prayer partner” to many. She is survived by her son, James Gregory (Jamie) Richards, Jr. of Grand Prairie; sisters Melody Sexton (husband Lyndell), Kristi LaCour, Lori Jones (husband Scott); her beloved grandchildren - Ezekiel Richards, Andrew Richards and Scarlett Richards; great-grandsons Elijah and Isaiah; Goddaughter Jessica Ferrell; and leaves numerous nieces, nephews, cousins, and friends to cherish her memory. A celebration of Deborah’s life will be held Saturday, January 29, 2022 at 2:00pm at CrossPoint Church of Christ, 3020 Bardin Rd., Grand Prairie, TX. Her life’s message was one of redemption - Love, mercy and forgiveness. She would wish for us all to extend these qualities to the best of our ability, as her loving heavenly Father offers it to each one of us. I Cor. 13:13 “And now these three remain: faith, hope and love. But the greatest of these is love.” Arrangements entrusted to Guerrero-Dean Funeral Home under the direction of Aaron King, Funeral Director.

The family of Deborah "Debo" Lyle Potter Richards created this Life Tributes page to make it easy to share your memories.