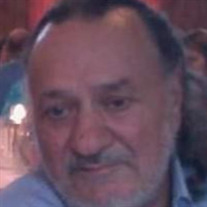 David Ronald Sciaretta, known as Dave to friends, 77, of Mount Vernon, Texas, went to be with the Lord on October 23, 2021. Memorial Service: 3:30 p.m. Wednesday, December 1, 2021 at DFW National Cemetery, 2000 Mountain Creek Parkway, Dallas, TX, 75211. David Sciaretta was born on August 28, 1944 in Rochester, Pennsylvania, the son of the late Philip Sciaretta and the late Josephine Pecone Sciaretta. Shortly after graduation from Freedom Area High School, he joined the US Marine Corp, serving from 1962 until 1965. He served his country valiantly in Vietnam, receiving several Purple Hearts from injuries during his tours. Dave was a man of many talents with his hands in a vast array of professions, ranging from a private investigator to an ordained minister. Ultimately his heart was set on driving big rigs coast to cast for more than fifty years. He was the owner of Sciaretta Trucking, hauling goods for Liberty Transportation of Alexandria, Pennsylvania. Dave loved to cook, had an exceptional sense of humor and an abundant love for his friends and family. He is survived by a daughter, Tiffany Moore (Danny), grandchildren, Sheldon, Ti'Anna and Kameron Clark; son, Ronnie Sciaretta; brother, Dominico Sciaretta (Patricia); nephew, Anthony Sciaretta (Beverly) and numerous nieces and nephews. In addition to his parents, he was preceded in death by daughter, Davina Neuphane Sciaretta; siblings, Charles Sciaretta, Della Sciaretta Dunsieth and Helen Sciaretta.

The family of Dave Ronald Sciaretta created this Life Tributes page to make it easy to share your memories.

David Ronald Sciaretta, known as Dave to friends, 77, of Mount...

Send flowers to the Sciaretta family.