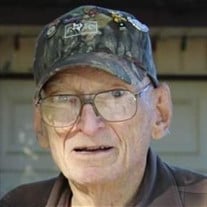 Curtiss Rowe Price, 82, long-time resident of Grand Prairie, passed away on December 5, 2019 at a Dallas hospital. Visitation: 12 to 1 p.m. Monday, December 9, 2019 at the Woods United Methodist Church, followed immediately by funeral services at 1. Burial will occur at Restland Memorial Park in Dallas. Curtiss Price was born on February 6, 1937, the 4th of 5 children of the late George Homer Price and Fannie Veopl Farmer Price in Corsicana, Texas. He was raised in Corsicana, eventually moving to Irving then finally to Grand Prairie. Curtiss would begin a career, working in sheet-metal as a fabricator. His employment included various employers, until finally becoming a supervisor and retiring from Cutler Hammer Manufacturing. Always strong in his faith, he and his family would be charter members of The Woods United Methodist Church, originally Englewood. He loved working with wood, and would spend countless hours doing so in his shop at home. He is survived by his spouse of fifty-two years; Paula Florence Rule Price; son, Patrick Price and his spouse Dianna; grandchildren, Courtney Price, Preston Price, Lilliana Price, Jacob Silva, Edward Silva; siblings, Iris Price Freeman Helsa and Brenda Price Pope Grant. In addition to his parents, he was preceded in death by a son, Nick Price, and siblings, George "G.H." Price and Lonnie Alan Price.

The family of Curtiss Rowe Price created this Life Tributes page to make it easy to share your memories.

Send flowers to the Price family.