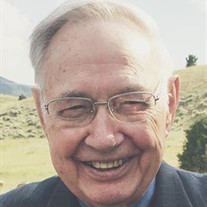 Chester E. Moyers, a loving child of God, died on December 28, 2021, at Baylor Scott & White Heart Hospital in Plano, Texas. Chet was born on May 17, 1934 in St. Louis, Missouri, and raised in Fredericktown, Missouri. At age 17 he joined the United States Navy and served honorably as a sailor and chaplain during the Korean War until his discharge in 1955. He then married Janet Rose in Chillicothe, Missouri. He was graduated from the University of Missouri - Rolla in Electrical Engineering in 1959. He worked for McDonnell Douglas in the aerospace industry on projects that spanned the Gemini, Apollo, and Skylab missions. He completed his career at Borg Warner where he worked in the automobile industry as a Senior Project Engineer. Chet and Janet lived in Springfield, Illinois, St. Louis, Missouri, Decatur, Illinois, Sterling-Dixon, Illinois, and Dallas, Texas, where their home was always a refuge for many in need of faith and love. Chet was a student of the Bible, frequently called upon for services and bible study classes, baptised many into Christ, and was involved in numerous Christian ministries. He worked across lines of denominations and ideologies. Chet and Janet traveled to Israel on many occasions. Chet is survived by his wife, Janet Rose, son, Jon Moyers (Suzanne), daughter, Candace (Kevin) Wyne, and son-in-law, Tony McWilliams, and preceded in death by his daughter, Gail McWilliams, sister, Dorothy (Carl) Painter and parents, Earl and Hazel Moyers. He was dearly loved by his grandchildren, Dr. Megan (Dr. Cameron) McMillan, Zachary (Julia) Moyers, Anna Gail McWilliams, Lindey (Ryan) Duckworth, Holly McWilliams, Lydia (Chase) Fowler, Connor (Kaitlyn) McWilliams, Kyle (Holly) Wyne, Andrew (Emily) Wyne, Cara (Dan) Crumrine, and Timothy (Jamie) Wyne, and 19 great grandchildren. The Celebration of Chet's Life will be held at Prestonwood Baptist Church, 6801 W. Park Blvd., Plano, Texas, in the Chapel, on January 7, 2022, at 2:00 pm, and his committal service will be held at the Dallas-Ft. Worth National Cemetery on January 11, 2022 at 11:30. In lieu of flowers, the family would suggest donations in Chet's honor to Prestonwood Baptist Church.

Chester E. Moyers, a loving child of God, died on December 28, 2021, at Baylor Scott & White Heart Hospital in Plano, Texas. Chet was born on May 17, 1934 in St. Louis, Missouri, and raised in Fredericktown, Missouri. At age 17 he joined the... View Obituary & Service Information

The family of Chester E Moyers created this Life Tributes page to make it easy to share your memories.

Send flowers to the Moyers family.