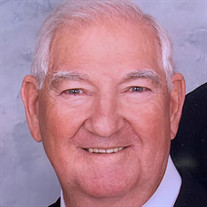 USAF CMSgt (Ret) Carlton Henry Dorman, 90, a native of Harbeson, Sussex County, Delaware, former resident of Irving and current resident of Plano, passed away peacefully on Friday evening at his home. In lieu of flowers, the family request gifts be given in Carlton's name to the Texas Lions Camp, http://lionscamp.com/Donations, or 4100 San Antonio Hwy, Kerrville, Texas 78028. Visitation: 12 to 1 p.m. Friday, August 14, 2020 at Guerrero-Dean Funeral Home, 500 E. Main Street, Grand Prairie, TX, 75050. Because of pandemic restrictions, a committal service for family members only with full military honors will follow at DFW National Cemetery. Carlton Henry Dorman was born on December 1, 1929, one of nine children born to the late Lloyd Dorman and the late Dorothy Ellen Shockley Dorman. He would attend school and graduate in Delaware before joining the US Air Force. He would spend the next twenty years serving on various bases all across the world. After his discharge, Carlton would pursue a degree in accounting, graduating from Midwestern University in Wichita Falls. He worked for Atlantic Richfield Co. (ARCO) and Sante Fe Minerals of Dallas in the accounting departments, before finally permanently retiring in the mid 1990's. While employed at Atlantic Richfield, he would meet Carolyn Paddack. They would marry on January 6, 1996 in Irving, and were preparing to celebrate twenty-five years together. When health allowed, he loved a round of golf or bowling. In the early 1980's, he began painting. His home is filled with many of his oil and canvas works. He and Carolyn enjoyed traveling, with memorable vacations to Germany, Puerto Rico and an Alaskan Cruise out of Vancouver, Canada. Carlton was a member of First United Methodist Church of Plano and Lions Club International. He participated in many conventions, on International, State and District levels. He was a Melvin Jones Fellow and an Ed Flood Fellow. He also owned acreage, and when needing to relax, would make the hour long trip to East Texas. Just starting the tractor to mow and brush hog was enjoyment and therapy. Survivors include his wife of twenty-five years, Carolyn Paddack Dorman; children, Brenda Vanderploeg, Bruce Dorman and his spouse Peggy, Steven "Steve" Pedigo and his spouse Kelly, Michael "Mike" Pedigo and his spouse Linda, Sherri Veach; grandchildren, Shane Sandifer, Sarah Standifer, Stephen Standifer, Spencer Standifer, Alyssa Vanderploeg, Michelle Dorman, Robert Pedigo, Griffin Pedigo, Priscilla Hale, Erica Quigley, Andrew Pedigo, Chace Smith, Spencer Smith; numerous great-grandchildren; siblings, Roger Dorman, Richard Dorman and Val Davi. He is also survived by a large extended family of nieces and nephews. Carlton was preceded in death by a wife, Mary Ellen Dorman and a daughter, Katherine Denise Dorman.

The family of USAF CMSgt Carlton Henry Dorman created this Life Tributes page to make it easy to share your memories.

Send flowers to the Dorman family.