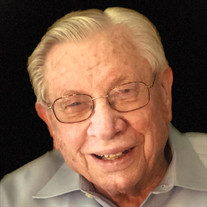 Calvin Clifton Brundrett, 92, lovingly known as "Cal" to friends, entered into the arms of his Savior, early Saturday morning, December 12, 2020 at home in Grand Prairie surrounded by family. Calvin Brundrett was born on August 25, 1928 in Normanna, Texas, a small community in Bee County, the oldest of 3 sons born to the late Clifton and Nora Brundrett. He was raised and attended school in Skidmore where he was a 1945 graduate of Skidmore High School. Cal learned the value of hard work, dedication, customer service and ethics at an early age. He worked with his parents in their grocery market and at the age of 11 Cal took over a local paper route delivering 7 different papers each day to his customers. After high school graduation, Cal had earned enough with his paper route to attended Coyne Electrical School in Chicago, Illinois where he would add to his knowledge and skill of HVAC service, installation, and refrigeration. It would be a skill he would use for the rest of his life. Cal served his country from 1948-1952 during the Korean War with the United States Air Force. One of Cal’s most cherished memories was the opportunity to participate in Honor Flight #32 in November 2016. On leave in 1951, Cal came home to marry the love of his life, Ruth, a marriage that would last 67 years until her death in June 2018. Calvin began his career in Sinton and Victoria, Texas in 1952. In 1958, he moved to San Antonio to work for the John Albert Company whose family would become lifelong friends. Cal went to work in 1962 with Lennox Industries in Fort Worth before purchasing Bon Air in Grand Prairie in 1973. He would become the driving force that would propel Bon Air into one of the leading HVAC providers in the Dallas-Fort Worth area. Cal and Ruth were instrumental in the success of many projects and events in and around their communities and church. They were honored for their commitments of service with many awards. Cal was named Grand Prairie Citizen of the Year, Small Business of the Year and Volunteer of the Year. He was recognized within the industry as a Lennox Circle of Excellence award winner, TACCA Distinguished Lifetime Achievement, Dave Lennox Premier Dealer and the Dave Lennox Centennial Award. He worked countless hours and was a generous donor to many organizations, he donated protective vests for the Grand Prairie Police Department K-9 unit, he also contributed to Freedom Service Dogs of America, Mutts with a Mission, World Vision, and the local homeless initiative GPHOO. Cal was also a charter member of the Grand Prairie Metro Rotary Club becoming a Paul Harris Fellow, Grand Prairie Boys and Girls Club, Lifeline for Families, Children First, Grand Prairie Chamber of Commerce, ACCA. He was a faithful member of First Baptist Church of Grand Prairie where he served as a deacon, mentor, and loyal friend. Though Cal, a faithful servant loved his community and industry, his love and relationship with his Lord Jesus Christ was first in his life. He lived his faith daily and shared with others so they might have the assurance of God's promises for eternal life. Cal worked quietly to do mission work through his church, Texas Baptist Men, Lay Witnesses for Christ International and others. He supported youth camps and missions locally and internationally. His desire was for everyone to have the opportunity to have a personal relationship with his Lord. Survivors include: daughter Jeanine Brundrett Walker and husband Jasper, son Russell Brundrett and wife Kathy, brothers, Weldon Brundrett, Raymond Brundrett and his spouse Elaine, sister-in-law, Nella Faye Peebles, 8 grandchildren, numerous great grandchildren, great-great grandchildren, nieces and nephews, a host of dear friends and his faithful fur companion Mia. Calvin is preceded in death by his wife Ruth, son Larry and wife Dede Brundrett, and grandson Clifton Abraham Walker. In lieu of flowers, the family kindly request memorials be given in Calvin's name to one of the following: The Cal and Ruth Brundrett Scholarship Fund, c/o First Baptist Church of Grand Prairie, 950 Mayfield Road, Grand Prairie, TX, 75052; Lifeline for Families Inc., 123 W Main Street, Grand Prairie, TX, 75050; Grand Prairie Homeless Outreach Organization, 727 Hill Street #C, Grand Prairie, TX, 75050. Expression of Gratitude: We wish to thank our many friends for their kindness shown in our bereavement. We thank you for your prayers, telephone calls, cards, flowers and your petition to God for our strength. We would also like to thank Diann and Jackie for their compassion and dedication to help us care for Calvin.

Calvin Clifton Brundrett, 92, lovingly known as "Cal" to friends, entered into the arms of his Savior, early Saturday morning, December 12, 2020 at home in Grand Prairie surrounded by family. Calvin Brundrett was born on August 25, 1928 in... View Obituary & Service Information

The family of Calvin Clifton Brundrett created this Life Tributes page to make it easy to share your memories.

Send flowers to the Brundrett family.