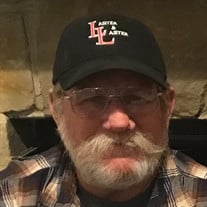 Bobby Ray Goforth, 67, a native of Pomona, California and current resident of Venus, Texas, passed away Sunday, December 15, 2019 at home. Memorial Service: 2 p.m. Friday, December 20, 2019 at The Heartland Church, 4020 Nazarene Drive, Carrollton, Texas, 75010. Bobby Ray Goforth was born on July 3, 1952, one of seven children born to the late James "Cotton" Eli Goforth and Grace May Swift Goforth. In 1974, he would marry Joanna Hutson, who would be his companion, best friend and wife for the next forty-five years. Their family would be blessed with the addition of 2 sons. Bobby would work for Bell Helicopter for twenty-five years. After his retirement, he enjoyed spending time going on cruises or traveling in his travel trailer. He was also able to spend time working on his model train city, built in the shop behind his home. Words used to describe him could be tradesman, craftsman, but most importantly, a man of faith. He enjoyed Bible studies, especially those focusing on the book of Revelations. Survivors include his wife, Joanna; sons, Christopher Goforth, Benjamin Goforth; grandchildren; Donovan, Caeman, Kaia, Ivy, Durand, Marilyn, Hannah, Samuel; great-grandchild, Draven; mother, Grace Goforth; siblings, Clifford, James, Kay, Randy, Phillip and Dale.

The family of Bobby Ray Goforth created this Life Tributes page to make it easy to share your memories.

Bobby Ray Goforth, 67, a native of Pomona, California and current...

Send flowers to the Goforth family.