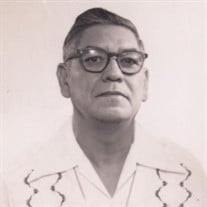 Benito (Bernadino Ricardo also known as Ben and Tío [uncle] Benny) Serenil took his last breath here on earth on June 18, 2020 at Arlington Memorial Hospital in Arlington, Texas after a relatively short period of illness, given his long and productive life of 90 years. Tío Benny had emphysema in his later life and fractured his hip earlier this year, but mostly lived independently throughout his life. The weekend before his Thursday parting, Tío Benny was at home in Arlington, Texas. Tío Benny’s long and remarkable life began in Douglas, Arizona on April 3, 1930 when he was born to his parents now deceased, Florentino Serenil and Guadalupe Carreón Serenil. Tío Benny was the youngest child and as result grew up with the additional love and care of his four now deceased sisters, Frances Serenil Alvarado, Margaret Serenil Arnold, Ignacia Serenil Reyes, and Juana Serenil Jiménez. A legacy that Tío Benny began to build with his family back then was that of learning to live and love fully even in the context of difficult times such as the depression. Although mild-mannered and unassuming, Tío Benny’s life was marked with major accomplishments and many contributions. Somehow and with the help of others, Tío Benny learned to combine his setbacks and shortcomings with his talents, character, and values to accomplish things, all for the benefit of others. Not needing extravagance, Tío Benny was most happy to live simply. Tío Benny’s “si se puede” (yes you can) spirit can be partially appreciated by all the training and education he undertook, training that would later be his principal scaffolding in serving and uplifting others. Tío Benny graduated from Douglas High School (Douglas, AZ), attended Maryland University for three years, earned a degree in petroleum engineering from Riverside College (Riverside, CA), earned a civil engineering degree from Texas Western College (El Paso, Texas), and earned still another engineering degree from the University of Texas at Arlington. Noteworthy is that Tío Benny was advancing his education in disciplines where and during historical periods when opportunities were limited. Clearly many of us are “standing on his shoulders”. Somewhere in between his training, Tío Benny served his country by joining the U.S. Airforce. Moreover, he decided to partner with another equally progressive individual, Lucy (María de la Luz Hernández) as his wife between November 25,1956 through March 2, 2019 when, she too, took her last breath in this earthly existence. Tío Benny and Tía Lucy could but wouldn’t boast of not only having been married for almost 63 years, but having been committed to a wedded life of selfless and meaningful service to others. Tío Benny’s deep sense of industry, God given and family supported, as he would say, can be partially seen by his work, both remunerated and volunteered. As an engineer, Tío Benny worked at Pacific Aircraft, El Paso Water Utilities, and Boeing Company from which he retired. As a professor, he worked at a number of places including South Seattle Community College and Washington State Community College, from which he retired as well. As an engineer and professor, Tío Benny contributed substantially and meaningfully, but it is perhaps his role as a Deacon that gave him the ultimate fulfillment and place in life, and as we may expect, his place in his afterlife as well. Tío Benny’s role as an ordained minister of the Catholic Church permitted him to serve as he desired: “not to be served but to serve, and to give his life for many” (Mark 10:45). As minister of the word, Tío Benny proclaimed the Gospel and usually with few or no words. Nonetheless, Tío Benny did preach and teach much in the name of the Church. As a minister of the sacred liturgy, Tío Benny baptized, lead the faithful in prayer, distributed communion, witnessed marriages and supported funeral services. On funeral services at one funeral home, it is estimated that he conducted over 500 funeral and burial services. As a minister of charity, Tío Benny, with Tía Lucy at his side, was a leader in identifying the needs of others, particularly others who confront inequality and social exclusion. Stories of his sacramental identity are countless and inspiring. Tío Benny was ordained a Deacon on April 1, 1978 at the Cathedral Santuario de Guadalupe in Dallas, Texas and served the Ft.Worth Diocese (Texas) as such until he retired. In sum, Tío Benny was a one-of-kind “guerrero” (warrior) who had mishaps as a young man but ended up having one of the kindest and most noble souls around. Tío Benny was a man of enormous faith and as such loved, welcomed, and shared unconditionally. Somehow, through the grace of God, as Tío Benny would say, all was possible. Tío Benny is survived by a number of relatives, mostly nieces and nephews including the sons from his sister Frances Serenil Alvarado: Art Caballero, John Contreras, Carlos Contreras, Stephan Contreras, and Mark Contreras. From Tía Lucy’s side, he is survived by his brother-in-law, Angel Hernández, his sister-in-law, Ester Hernández Aguinaga, and many nieces and nephews including Ofelia Delgado and Hector Aguirre. Also surviving Tío Benny are a number of godchildren including a goddaughter, Ysenia Gonzalez. It is certain that Tío Benny would be happy to know that we understood how much we are loved by him and how perfectly we are loved by God. Committal Service took place at DFW National Cemetery with full military honors on June 26, 2020. Masses and rosaries are being organized.

Benito (Bernadino Ricardo also known as Ben and Tío [uncle] Benny) Serenil took his last breath here on earth on June 18, 2020 at Arlington Memorial Hospital in Arlington, Texas after a relatively short period of illness, given his long and... View Obituary & Service Information

The family of Benito R. Serenil created this Life Tributes page to make it easy to share your memories.

Send flowers to the Serenil family.