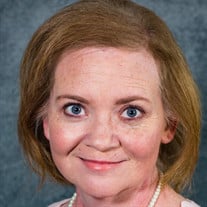 Amy Giordano, age 50, loving mother of twins and adoring wife to husband Steven Giordano, passed away, surrounded by her family, the afternoon of April 9th after a courageous battle against carcinoid cancer. Visitation: 5 to 7 p.m. Thursday, April 14, 2022. Funeral Service: 10 a.m. Friday, April 15, 2022. Both visitation and funeral will be at Trinity Baptist Church, 2001 W Pioneer Parkway, Grand Prairie, TX, 75052. Amy was born 1971 in Clovis, New Mexico and grew up in Tucumcari, New Mexico, surrounded by her sister Rhonda, mother Glenna, and father Dale, as well as a large extended family including many aunts, uncles, and cousins. Amy was influenced by her family to be a loving and caring woman who always put the needs of others before herself, she showed this throughout her ministry, her motherhood, and her marriage. She met her husband Steven in 1993 at an x-ray tech convention in Las Cruces, where it was love at first sight, and they were married soon after. Amy always knew that she wanted to be a mother, and after a long journey to get there, in 1999 she gave birth to twins, Caleb and Alyssa. She sacrificed much of her time and effort to make sure that her children were raised in a godly home, and taught them to trust the Lord and to serve Him always. In 2015 Steven and Amy were led to Trinity Baptist Church where she took on the role of pastor's wife. She embraced the members of Trinity Baptist Church as if they were her own family, and loved and cared for them with her whole heart. Amy loved the Lord, and knew that she would spend eternity with Him, and she wanted others to know and have the same peace that she had come to know. Even throughout her many hospital visits, she made it her priority to share the love of God with others, always assuring them that "To live is Christ, and to die is gain." Amy is survived by her husband, Steven; son Caleb; daughter Alyssa; sister Rhonda Cionek; mother, Glenna Gray; father, Dale Allenberg.

Amy Giordano, age 50, loving mother of twins and adoring wife to husband Steven Giordano, passed away, surrounded by her family, the afternoon of April 9th after a courageous battle against carcinoid cancer. Visitation: 5 to 7 p.m. Thursday,... View Obituary & Service Information

The family of Amy Elizabeth Giordano created this Life Tributes page to make it easy to share your memories.

Send flowers to the Giordano family.